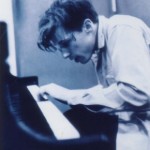 What struck me listening to the English Suites this time around (the Glenn Gould recording from 1977) is how different they are from each other. Each has its own personality. The second, for example, is expansive and refined, the first with such a long, imposing prelude, culminating in at once the most soaring and static (cathedral-like?) of gigues.* The third is the polar opposite of the second: it is hardly adorned, building patiently on its musical phrases, giving the performer time to settle them at his leisure. The fourth is expansive like the second, but of a romantic mood. The fifth sounds almost impossibly modern. I don’t know why it strikes me this way; Bach was hardly a stranger to chromaticism. As for the sixth, where to begin? At the end, maybe. The gigue is haunting. But here, I particularly appreciate the playful gavotte that directly precedes it: it sounds like children marching.

I first heard these suites, together with the French ones, on tapes a friend of my father’s made for him. I was probably 14 at the time and, an inveterate mixed-tape-maker of rock songs, I quickly copied my favorite sections from a variety of suites together on one side of a cassette; the other side had the first, fifth and sixth piano sonatas by Beethoven (performed by Wilhelm Backhaus), I think, which I had taped from my father’s records; and they, together with a couple of other cassettes of Chopin and Beethoven, and the pieces my father practiced nightly, constituted the core of my identification with classical music when I was a teenager. I made several other tapes, all from my parents’ records, but these first few pieces remain mine in a way nothing has since. The suites were thus all jumbled together and incomplete. So when I listen to them now, it is the suites themselves that seem all mixed up; and whenever I run into an old friend—the bourees of Suite #2, the gavottes of Suite #3—I ask, “What on earth is this doing here?” They still seem more natural where they appear on my old mixed tape than in their “proper” place in the middle of a suite. I like the rhythm and the tension this creates in listening to a suite as a whole, each section more or less familiar, more or less loved.

I should say something about Gould’s playing, for he is no doubt partly responsible for making each suite so distinct (and yet all of them together so distinctively Gould). I have another recording of the suites by Andras Schiff, another pianist I greatly admire, from about 10 years later. I have actually listened to the Schiff recording more, simply because I have so much Bach by Gould that I haven’t bothered to load Gould’s English suites onto my computer yet.** I was struck by the difference. Perhaps Schiff is a bit too high, a bit too serious, for Bach. (He certainly came across that way in the one master’s class I had a chance to see him teach.) Gould is so much more playful, intimate, even irreverent. He seems to dare to do with Bach what the composer might have done himself. I hope that doesn’t sound too theologically author-enamored. But no one else could play the children’s crusade of the sixth suite with those careless near-glissandos and pauses. Nor does he need to overemphasize the low trills and descending arpeggios of the gigue to make it truly haunting. I don’t think this is simply a matter of emotional memory or musical imprinting, either—that is, of the link between my discovery of classical music as a teenager (in the sense of finding a canon of pieces that spoke to me) and my association, surely a common one, of Bach with Gould.

* I can remember the first time I “heard” this gigue, really heard it, driving down old Route 24 through Chatham, New Jersey, onto an exit ramp by the Short Hills mall. Not the most propitious setting for a musical moment of being. But then I’m always unprepared for them; in fact, surprise seems to be an important factor, as a friend of mine, a fiction writer, noticed about similar moments in stories. My musical life is punctuated by listenings which, for whatever reason, transcend all previous and color all subsequent ones. I don’t imagine I’m alone in this.

** As a New Yorker, I do a lot of my listening while walking, and given the limited amount of space on my iPod, I rarely have more than a suite on there at a time, which means I rarely listen to them as a set … yet another example of the way the technology of reproduction affects how we appreciate and understand music.