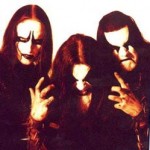 That I am not a true fan of Immortal, the seminal Norwegian black metal band (black as in Satanic, not African-American), but went to their recent show at the Brooklyn Masonic Temple anyway, is a sin for which I am still repenting. What follows is the text of my confession.

I was lost in Clinton Hill looking for the place—I had forgotten to bring the address; all I could remember was the first letter of the street name; the subway station was without an area map—when out of the blue my guardian demon appeared. She was pale, gangly, maybe nineteen years old, with stringy blond hair, and dressed in black from boots to hoodie. I asked her if she knew where the Brooklyn Masonic Temple was; excited, she asked if I was going to the Immortal show; I confessed that I was, and so we started walking to the venue together.

About a block later I could sense that she was becoming suspicious. After all, I didn’t look like an Immortal fan. I was dressed in a blue windbreaker over a quilted chamois shirt that everyone says makes me look like a lumberjack. I had on new jeans, North Face shoes, and a New York City Parks & Recreation baseball cap. I should have been on my way to play tennis, not to a black metal show. In fact, I don’t think she believed I was going to the Immortal show at all. I was really some middle-aged creep in a blue windbreaker preying on nubile young black metal chicks in the middle of Brooklyn.

True, underneath the windbreaker and chamois I was wearing a Mastodon T-shirt: the open-mawed white shark with the legend “Megalodon” in electric red letters. But a prog-metal shirt would hardly convince her that I was anything but a poseur. (Probably better I didn’t engage in any unzipping or unbuttoning in an attempt to show her my shirt. God knows how that might have been interpreted.)

She said, “So, what’s your favorite Immortal album?”

The ultimate fan question! It was like she had peered into my soul. Everything came out then: how I didn’t really know Immortal; how a friend of mine had bought me a ticket; how, had I known the show was forty-five dollars, I probably wouldn’t have come at all; how I had listened to one of the songs from the new album on YouTube and “liked it”; how I had actually seen Immortal once before, a couple of years back, opening for Halford and Testament at B.B. King’s, and had “enjoyed them” (in reality, I hardly remembered them at all, except for their creepy corpse-paint and synchronized thrashing).

Why was I suddenly so defensive? I could justifiably have said that I’d been listening to metal since before she was born. And yet, what would I have been trying to justify? Would there be some sort of litmus test at the door? Would I have to drink the blood of a ritually-butchered goat and recite the Lord’s prayer backwards? Would they at least give me part of my forty-five dollars back if I didn’t make the cut?

She said, “Wow. I never met anybody who was indifferent about Immortal before.”

And with those words it was clear that she was done with me. I had been consigned to the dustbin of metal history, together with my heroes, who were yet older than me.

At the show my friend and I bought tickets for beers like we were at an amusement park and commented on the number of hipsters who were crashing the party. I was safely with someone nearer to my own age now, so I could claim old-guard status, and hence a certain degree of authority. After all, whether I loved Immortal or no, I was here because I loved metal; I wasn’t one of “those hipsters” who had come to stand in the back and sneer. I thought, “Thank God for hipsters,” and drank until I almost put that nineteen-year-old Immortal freak out of my mind.

I did end up enjoying the show, as I knew I would—the endless blast beats, the suffocating double bass, the sheer squandered volume of theatrical smoke, the generally eeeeeevil atmosphere they managed to create between the music, effects, and corpse-paint.

But there was something I enjoyed much more than Immortal, and that my non-love for Immortal allowed me to appreciate. It was watching those who did love Immortal. There were fans there as young as eighteen (and maybe younger, despite the age cutoff) and as old as fifty. They were there with their girlfriends or boyfriends or in same-sex groups. They absolutely exploded when the lights went down, and the shadow of the drummer appeared behind the kit, and then the other two members of the trio sprang from the wings in a miasma of noise and smoke. They banged their heads and made devil-horns. They knew all the words, and “sang” them, too, as surely as if the lead singer had said, “Now, boys and girls, aspirate along with me …”

There’s a gesture I’ve been thinking about a lot since that concert. Not the fist, and not the malocchio. The hand is open, palm turned three-quarters up. The fingers are slightly curled—the index finger should be the most extended, the pinky most curled—and taut, so that the hand looks like a claw (see photo). The arm is also rigid, bent slightly at the elbow, and raised over the head. Now, diaphragm tensed, spit the lyrics back at the singer-guitarist, word for word, mirroring his delivery. That was what I saw when I looked around the crowd: dozens of passionate individual performances, souls strung up and together by music, fans demonstrating their intensity to themselves and the rest of the crowd and the band. The arm really has to go up for the words to be broadcast with their full measure of vehemence (unless, that is, you’re also playing the guitar) … the metal version of that much-parodied gesture of singers worldwide, be it opera or flamenco or Irish ballad.

Ah, love for Immortal. What could possibly be Satanic about that?