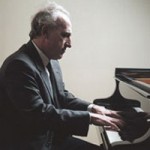 If I had to hazard a guess as to what was the musician, ensemble, or band I’d seen live more than any other, it would probably be Maurizio Pollini. The first time I saw him I was in my early teens, and I’ve repeated the experience maybe thirty times since. I know this is a number more commonly associated with rock bands, like The Dead and The Who, but it does make some sense: reunion tours notwithstanding, most rock bands don’t have this sort of longevity; classical and jazz musicians are more likely to age with you (plus the jazz musicians, when they’re local, are playing around town all the time). I saw Pollini play the complete Beethoven cycle in the late ‘80s, and got stage seats in the late ‘90s when the regular auditorium was sold out. There are some pieces by Beethoven, Chopin and Debussy I’ve probably seen him play a dozen times. If for whatever reason a year goes by without his coming to Carnegie Hall, I feel like I’ve skipped a season.

This year promised to be a treat: a series of three recitals, all of them all-Chopin. I bought tickets for all three, and then promptly missed the first during a blizzard of grading. It made me that much more eager for the second, which was last weekend, and the third, which, as I post this, is later today.

Among Pollini’s many gifts, perhaps the chief one—particularly for a pianist who specializes in that instrument’s romantic literature—is his ability to play commandingly at both ends of the dynamic range, from quiet passages of great expressive subtlety to tempestuous, often technically brilliant outbursts. It may just be my aesthetic, but the second seems the rarer gift. Playing the climactic moments of the great Beethoven sonatas (for example) convincingly, in such a way that the listener (at least this one, at least occasionally) is transported by the sublimity of the music, seems to me the true test of romantic pianism. It is in just such moments that many of even the greatest pianists fall short. Maybe it’s the dread of sentiment, or ridicule. (Emmanuel Ax to a student in a master’s class, regarding Brahms: “I want you to play faster and louder.” Chuckles from the audience, but hell, that’s the way I want my Brahms, too; and if you don’t give it to me that way, you might as well go play Haydn.) In fact, one of the things that has most impressed me about Leif Ove Andsnes (of the younger generation of top-notch pianists) is just this confidence at the all-guns-blazing end of the dynamic range.

One other thing about Pollini: he is as close to technically flawless as seems humanly possible. One can’t help but get used to such perfection … and to come to expect it.

Last weekend’s was a lovely program: two nocturnes, two polonaises, four mazurkas, the second ballad, the second sonata, and the opus 49 fantasy. But with the exception of the ballad and parts of the sonata, the execution fell well short of my expectations. Had it been only the fantasy (a piece I’ve always had trouble with, and hence am perfectly willing to blame Chopin for …!) and the occasional missed note, I might not have been bothered enough to write. But my disappointment was general, and seemed to arise from every facet of his playing. A nocturne, for example, should be easy to fall in love with. Just last year he played one as an encore, after a program of breathlessly-executed Beethoven, and my partner and I agreed that it was the finest thing he played that whole evening. So delicate. But on this night the nocturnes did not seduce me; the high notes in particular sounded strident. As for the sonata, the bells of the funeral march were muted—hardly bells at all—while the last movement, which on Pollini’s recording is barely audible, eerily affectless, and blisteringly fast, an undertow of notes, notes, notes, like some dark thought tormenting you, was muddled by dynamics that diminished the overall effect. The encore—the second scherzo—only sedimented my feelings about the whole recital. That technically daunting passage bridging back into the piece’s “A” section was almost painful to listen to.

Pollini, off? Surely it was a sign the end is nigh. I remembered the recent spate of earthquakes, the volcanic eruption in Iceland, the oil spill in the Gulf. Faiths would crumble, relationships end, distraught listeners leap from the balconies …

Or perhaps not. Nobody seemed to notice; the applause was general, thunderous; apparently the heavens don’t fall for such a trifle, as Conrad so aptly put it.

To be honest, by the end I wanted the audience to stop applauding. They’d never seemed so sadistic, or the pianist so much a gladiator, helpless but to engage in combat, now not with the music, but with his own body. I’d seen him play that scherzo before as an encore, obviously exhausted. But this seemed like more than mere exhaustion. And to think he could have come out and played a nocturne. I’ve seen him shrug before sitting down to play an encore, too, as if to say, What the hell. But there was no shrugging last weekend. It was as though he realized that he had no choice, that he was chained to that piano, slave to whipping-post.

During the concert, as my disappointment grew, my mind wandered from the music, and I started thinking about the piano’s role in our culture, and about what the public expects of its classical pianists generally, and Pollini specifically. Robert Walser traces the piano’s role as “music’s central vehicle for heroic individualism” back to Franz Lizst’s “invention” of the solo recital in 1839. Little seems to have changed since then, at least in terms of what we desire from our pianists: the incarnation of that heroic ideal, a musical athleticism that we don’t expect even from other classical performers. Not for nothing Chopin was portrayed by a barrel-chested Cornel Wilde in 1945’s A Song to Remember: the thirtysomething dandy already dying of tuberculosis must be dashing and exuberant, and built like Michael Phelps, at least for Hollywood. Today, the classical music industry seems to churn out hot young pianists as fast as supermodels, all bemedaled from this or that international competition. What happens to them as they grow old, or obese, or infirm—that is, as the body interposes itself between the music and the heroic spirit? Do they really age with us, as I said earlier, or are they turned out to pasture?

The above is not true of all pianists. Alfred Brendel, for example, crafted a very different persona for himself, a sort of living New Yorker caricature: bashful, introspective, erudite. (None of this is meant as a criticism of his playing, which I admire.) But Pollini has always seemed to be the poster-boy for romantic pianism. And he has retained this persona as his hair has grown whiter with each passing year.

I’m wondering, then, if what I witnessed last weekend was the passing on of the younger pianist, and if it is a transition that Pollini has not yet fully embraced, or does not quite yet know how to make, or, perhaps, is as yet unwilling to. I’m wondering, that is, if Pollini still wants to be the great athlete of the piano, even as his overwhelming technical facility begins to fail him. Because only an athlete could play the second scherzo for an encore. And last weekend, the athlete stumbled. Thinking back, I’m wondering if the desperate speed at which he played the Beethoven sonatas last year, his near-Puritanical distaste for rests, was a harbinger of this year’s recitals. And I can’t help but remember tubercular Tristram’s desperate, sentimental journey through France in Book VII of Tristram Shandy, fleeing Death and dancing mad circles with peasant girls; and the aging protagonist of John Cheever’s story “O Youth and Beauty!” assembling the furniture around the living room to run the hurdles one last time, about to be shot dead by his long-suffering wife.

All this is not to say that Pollini is a virtuouso without the depth of spirit to interpret these works. Nothing could be further from the truth. Pollini is a brilliant, even generous, interpreter. Today, we tend to be suspicious of virtuosity, as if any such display were necessarily emotionally bankrupt. It’s a combined product, I would guess, of the cult of authenticity and the culture of distrust. But like anything, great technique is as full or empty as the uses the artist puts it to. Virtuosity and affect aren’t so easily extricable from one another as seems to be imagined. Anyway, what was remarkable about this Pollini recital was the way in which a slight shift in the pianist’s ability to phrase and articulate and ornament pulled the curtain aside on the wizard, and all the gorgeous effects on which our emotional engagement with the music depends, and which themselves depend so much on coloring and sustain and a jumbling of musical phrases into a warm, distorted whole, suddenly vanish before our ears.

Finally, an irony to ponder. What does it mean for the music of a terminally ill thirty-five-year-old to be routinely performed by robust men and women of twice that age? Do the inverted ratios of health and age lead performers to perennially miss something in Chopin’s music?

Addendum. While I was in line for the bathroom at today’s third and final recital, I overheard an older gentleman commenting on the previous recital. He was disappointed, too, and when he saw me nodding vigorously, we fell to talking. It turns out that Pollini had been ill, though I’m not sure how he found this out. He thought they should have canceled or postponed that concert, and I agreed. Anyway, I’m just pleased that the infirmity was only temporary. The berceuse today was a gem—how can anyone’s right hand can get those sounds out of a piano? It was also great to hear him back in form for the Bm sonata, a piece which, like Pollini, grows with me. May he continue to run those hurdles for many years to come, Death nipping at his heels the whole way.

And still the nagging question: Why the second scherzo for an encore, if he was indeed sick? And so all the musings about sadism and aging romantic bodies and musical athleticism continue …