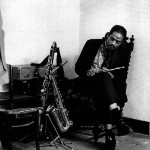 One dusk not so long ago I was walking around the tract housing development (or “semi-custom,” as some of the locals call it, except that there are no locals there, and no such thing, when you come right down to it, as semi-custom) north of Houston where my parents live, listening to Out to Lunch. I should begin by saying that this is the sort of neighborhood that makes marijuana pointless. The combination of curving streets, dead ends, and nearly identical houses make me want to leave a trail of breadcrumbs. Everywhere I look are the haunted traces of suburban bliss: overturned bicycles on lawns, abandoned playgrounds with empty swings slightly rocking, single-car garages awaiting their occupants. Some days it all reminds me of a façade built on a testing range in the Nevada desert.

That evening, passing house after house in the near-dark, I was struck by a counterintuitive aesthetic kinship. For my typical feelings of disorientation were heightened almost to dizziness by the wonderfully disorienting compositions and improvisations that make up Out to Lunch … so much so that, after walking for a while, I was forced to retrace my steps in order to get back to my parents’ house, even though, as I realized later, I had made almost a complete circle. I could only blame Eric Dolphy for this: for pretzling the insipid curves of the suburban beautiful; for making me believe a man in a bowler hat stood poised with a net behind every door.

I think what Dolphy’s music did was expose the neighborhood’s essential weirdness, dis-integrating it, disassociating every element—every lonely pine tree, every shutter, every glass door—from every other, and making all of them seem like the products of an alien culture. In “Aminadab,” Sartre defines the fantastic this way: you order a coffee; the waiter brings you an inkwell; you say, “But I ordered a coffee”; the waiter says, “That’s right.” In fact, Sartre’s conception of the fantastic as “the revolt of means against ends” is a not a bad formula for describing Dolphy’s music.

Unlike in the suburbs, though, there is no retracing your steps with Dolphy, no equivalent of a trail of breadcrumbs. There is only a staggering forward motion, as of a man riddled with bullets, leading only to the most unexpected places, or to nowhere.

Out to Lunch is probably the pinnacle of Dolphy’s ensemble work. As has been noted, this is because it is the only Dolphy album where the walking rhythm section gives way to free-form improvisation by all the bandmembers. And what a band it is. Bobby Hutcherson’s vibes seem to fit most perfectly into Dolphy’s idiom, forcing us to ask where the vibes were before. (Mal Waldron’s piano occasionally has that vibelike timbre on the Five Spot sets and other albums; but it makes me wish Dolphy had recorded with Earl Griffith, whom I know only from the Cecil Taylor recording Looking Ahead!) The Richard Davis-Tony Williams rhythm section acts in perfect questioning counterpoint to the rest of the band, Williams’ resounding toms and bass drum in particular. In fact, the snare is almost vestigial. Only Freddie Hubbard seems a little out of his element here, as if he occasionally realizes he’s lost his way, and by doing so makes the listener aware of it, too (rather than simply being pleasantly lost with the rest of them, and us).

One thing that needs to be stressed about Dolphy is his gift for melody. It is a paradoxical gift. His melodies are at once catchy and unsingable, groovy and jagged. The heads of “Out to Lunch,” “Gazzelloni,” and other tunes will stay stuck in my head for days after I listen to them; and yet I’m sure my memory of them is corrupted, both in terms of time (for “Out to Lunch,” for example, it’s notoriously difficult to remember where each symmetrical part of the melody ends, as well as how long are the breaks between each part) and pitch (I hear a travestied version in my head, and woe is me if I try to hum them accurately, or figure them out on my guitar). There is something magical about this combination of the seemingly-accessible but perennially-out-of-reach. They’re a long tease; the alto sax, the flute, and the bass clarinet are all laughing at me, each in its appropriate register (whoop, giggle and guffaw, respectively).

Part of what makes the tunes so catchy is their infectious rhythm, which Dolphy carries over into his soloing. I remember listening to him on the Live at the Village Vanguard recordings with Coltrane’s quartet (this while driving a rental car into San Francisco via the Bay Bridge) and realizing that he swung like crazy, yet every note—every note!—was “wrong.” The rhythmic grammar of bebop was being co-opted to speak a new language. If Scott Deveaux is correct (in his awesome Birth of Bebop) that it was the rhythmic more than the harmonic advances that made bebop bebop, then perhaps it was with Dolphy (and the other musicians forging the avant-garde at that time) that bebop rhythm began to find an appropriately crooked harmonic language.

There are other fascinating elements to his soloing, on Out to Lunch and other albums. Dolphy can play a slow, whining blues like nobody else, with a plaintiveness that borders on self-mockery. And then those trills, always too high or too low. The huge leaps across the range of the instruments. The moment on “Out to Lunch” when, after all that empty space (the whole album absolutely revels in space), the alto irrupts back into the song in a long cascade of misplaced notes. On the other hand, I also like the way Dolphy has a standard line that he plays over and over and over again, that he must have played a million times over his short life. He plays it seemingly unthinkingly as he gears up for each next musical idea, returning to it obsessively, though with slight variations. It is the musical equivalent of “ummm …” As such it is the purest expession of his musical thinking, the background radiation of his personality. I imagine it was what he was thinking from the moment he forsook the nipple for the reed.

Dostoevsky’s Underground Man raged against the tyranny of 2 + 2 = 4. Why, oh why couldn’t 2 + 2 = 5? Well, Dolphy is that happy psychotic for whom 2 + 2 is 5. He was utterly, unshakeably convinced of this. It was his great leap of faith to believe so, the law of his particular universe, to which, of course, he was perfectly well-adjusted. It’s probably why he was (reputedly) such a sweet person. And it’s no wonder so many other musicians wanted to come along.