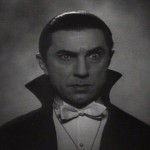 Over the last intersession I had a chance to read Robert Spadoni’s Uncanny Bodies (U California, 2007). The book examines, as its subtitle says, “the coming of sound film and the origins of the horror genre,” with particular attention to the reception of Dracula and Frankenstein in the context of Hollywood’s transition to sound (1927-31). For Spadoni, the uncanniness of Dracula—and by extension Dracula’s early popularity and prestige, which seem inexplicable today—was partly attributable to the uncanniness of the speaking figure itself in early sound film: “figures now [circa 1930] seemed more vivid and animated, and yet … [they] could seem distinctly less alive than before” (22). Conversely, Whale’s mute Monster was a throwback to silent film, which had already begun to seem alien to audiences habituating themselves to sound. The nascent horror film genre capitalized on this dialectic of spectatorship as its conventions began to solidify, “convert[ing] a fleeting reception phenomenon into the solid basis for an enduring genre practice” (7).

As interesting to me as the overall argument and imaginative close-readings, however, are some of the tidbits Spadoni includes about how the transition to sound was perceived. Here is one: in the early ‘30s, “nondiegetic music was not yet a norm of Hollywood sound cinema. There was disagreement as to how much, if any, nondiegetic music a film should contain. Some believed that music would annoy viewers who were trying to listen to dialogue; others worried that viewers would be wondering where the music was coming from. Still others feared that viewers would find incidental diegetic noises distracting, as well. As a result, dialogue scenes sometimes played out against inordinately quiet backgrounds” (22).

As I noted in an earlier post, I spent much of my last filmgoing year and a half watching silent movies shown in two series at the Museum of Modern Art: “An Auteurist History of Film” and “Daydreams and Nightmares: Weimar Cinema 1919-1932.” (The Weimar series just ended; the “auteur” series is ongoing, but finished the silent period several months back.) After reading the above passage, I found myself reflecting on some of the uncanny convergcnces between my own experiences watching silent films and those of the original audiences of early sound cinema.

MOMA is probably one of the few places in the world where you can sit in the midst of a near-silent public watching a silent film without accompaniment. Whispering spectators are violently shushed; snoring ones are cudgeled awake. When such a hard-fought silence reigns in the cinema theater, the image can indeed take on an uncanny, ghostly, quasi-theatrical power, akin to Spadoni’s Dracula or Monster. The images transfix us, like daguerreotypes of the newly deceased. And yet, in such a thuggishly quiet environment, where the proverbial dropped pin resonates like a church bell, the spell is easily broken by any noise from the theater: the rustling of those ubiquitous plastic bags; the swishing of latecomers’ hands along the railing as they descend the stairs in near-darkness looking for an open seat. (To this one would have had to add the ka-thunk of chairs every time a spectator left the theater, a dozen or so ka-thunks from every seat, like a spinning saucer coming to rest. Thankfully, when the museum was renovated several years ago, they replaced those seats—yet another annoyance become nostalgic memory.) Finally, during an unaccompanied silent film, one can hear the muted whir of the projector … and even, sometimes, the noise of the projectionist, that phantom figure behind the curtain, himself a sort of absent presence, like the images on the screen. My favorite moment here is when a friend and I went to see October without accompaniment, and we could hear something that we eventually identified as a TV program. It turned out that the projectionist was watching Wheel of Fortune in the booth. Was he aware of the irony?

For most silent films, however, MOMA provides piano accompaniment. Early sound film viewers would not have been unaccustomed to sound itself during a film, but rather (as Spadoni notes) to the question of the source of the sound without the living sound-makers present, just as they questioned where the voices were coming from when the technology was so primitive as to make it seem those voices were coming from anywhere but the actors’ mouths.* Today, the scheme is reversed: having a live pianist in the room is potentially as distracting to the modern viewer unaccustomed to seeing silent films in the theater as the presence of nondiegetic music or poor sound quality for dialogue was for early sound cinema viewers. We have become so accustomed to the “speaking effigies” that live presence/performance during a film has a certain uncanniness about it.

Indeed, a live pianist today can not only disrupt dialogue, but the whole cinematic experience … and to a far greater degree than a badly-scored film. During the recent showing of a restored version of the 1918 J’Accuse, I left the theater after the first hour. It wasn’t the film; it was the piano, which was so overbearing that I couldn’t focus my attention on the action. The same thing can happen, though to a lesser degree, when the pianist makes an obvious error, or seems to play out of synch or out of character with the images on the screen. (I would guess that the prevalence of recorded music, together with the growth of music as a profession, has made us less tolerant of mistakes than early silent film audiences were.) Conversely, like a good score, a good silent film pianist will blend into the movie, clarifying and emphasizing character and conflict, and helping to weld the visual elements together into a whole …  which is sort of ironic, given how much of such accompaniment seems to be a Frankenstein’s Monster of stitched-together pieces of popular songs and romantic melodies.

The presence of intertitles adds a whole other interesting wrinkle. A movie pianist has no reason to stop playing during an intertitle; in my experience, they generally play without stopping from the first frame to the last, although they may pause at moments of high tension, often with a staccato burst, to let the action play out unaccompanied. But MOMA also shows a lot of foreign silent films, many of which are without subtitles. Sometimes they will just show the film in its original language without translation. On other occasions, they will have a translator in the cinema with a microphone.**

This creates yet another sonic layer to the “silent” film experience, and a dilemma for the pianist that reminds me once again of those early concerns about sound film: the voice of the interpreter rendering the dialogue or narration of the intertitle competes with the music provided by the live piano. The piano may stop and start, or at least modulate its dynamics, according to whether the translator is reading. This creates an unattractive rhythm, disrupting the ambience of the film, while the wooden, often halting voice of the translator drains the intertitle of the inflections that the viewer’s mind provides upon reading the words. (That said, it is far worse to have an interpreter who tries to read the intertitles dramatically, as I have also experienced.) Once again, the concerns about the “talking” film at the dawn of the sound era are ironically recapitulated in the unsubtitled foreign silent film at the beginning of the twenty-first century: now, it is the dialogue (or narration) that interrupts the music, not the reverse.

* I wonder if this helps account for the seeming abundance of diegetic music in early sound film … and perhaps for the immediate introduction of the musical (apart, that is, from sheer novelty), despite the technological challenges of early sound. A piano accompanying a silent film often plays nondiegetic music and simulates diegetic events: staccato chords for slammed doors and hammer blows, a descending glissando for a collapsing tower, etc. The piano is a whole soundtrack unto itself, confusing and collapsing the diegetic and nondiegetic, “miming” as much as the actors do. Perhaps the diegetic music was there to help fill the void of the suddenly-obvious silence of sound film (e.g., the resident pianist in the Weimar film Farewell (1931), who plays while he converses with the other guests in the boardinghouse where the movie is set), or to provide a clear source for the music. In other words, if there was a fear that early audiences “would not know where the sound was coming from,” but filmmakers wanted to capitalize on “the power of music to make mobile and to vitalize” (Spadoni 23), the presence of the performer on-screen—whether a character who happens to play piano, or a full-fledged musical number—seems a viable way of resolving the problem. As for the early musical: like the piano, the musical seems to be a place where the diegetic and nondiegetic cross over: the music is at one and the same time performed on screen and transcends the narrative moment, enveloping the diegesis in a way that only nondiegetic music can.

** In my understanding, this is not the same as the role of the narrator in the early cinema, who would tell the story of a film without intertitles, whether in English or no. It would be interesting to find out to what degree this practice was used for early foreign silent films, rather than subtitles or replaced intertitles. For an idea of the possible sonic environments of silent cinema, see, for example, Robert Sklar, Movie-Made America (Vintage paperback, 1994), pages 16-19 and 86.