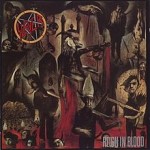 Twenty-five years ago this month, Slayer unleashed Reign in Blood, and the world became a slightly more evil place. The earth has spun a little differently on its axis ever since, as geologists can measure whenever a mega-dam is built: an infinitesimally-increased tilt toward the dark side.

On the night of October 7, 1986—the night Reign in Blood appeared—the sky was the color of tar. Holy men all over the world were racked by lascivious dreams. On October 8, on playgrounds everywhere, little girls’ heads spun around with a watch-winding sound, to the amazement of their little friends, and there was an epidemic of pea soup spit up on school lunch tables, though it was not on the menu of the day. Dead things of unknown species washed up on Pacific shores from Japan to Chile, and in California, flaming birds fell out of the sky like flapping meteors.

Twenty-five years ago Slayer unleashed Reign in Blood upon the world, and the moon had never seemed quite so large, or so yellow, or so beautiful; you felt its tug the way the tide does, as if it were your estranged home. You heard the laughter of bats, the songs of wolves, and felt an almost irresistible impulse to run.

Twenty-five years ago, the first time you heard Reign in Blood, that nasty little wish you’d been harboring for weeks, for months, for years, suddenly muscled its way up to the front of your brain, like some forgotten passenger sleeping in the shadows by the restroom at the back of an otherwise-empty bus, who awakes with an inexplicable, murderous thirst for vengeance. He clambers his way forward by the cushioned headrests; you watch him coming in the big rearview mirror, and think: Well, yes; why not? There are knives in the kitchen, in the drawer beside the sink; there are matches in the cupboard in the hall.

When you play Reign in Blood this evening, as you must in celebration of Samhain—if, that is, you wish to curry favor with the man downstairs—make sure the needle is sharp. Prick your finger with it if you’re unsure. Have a towel ready to mop the blood off the platter and stylus when the album is over. And lean close to the turntable while the record is spinning—not to the speakers, but to the actual puckered grooves in the vinyl. You just might hear the cries of lost souls rising from those freshly-opened wounds.

One thought on “Reign in Blood at 25”