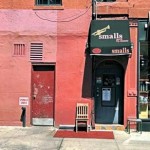 So you climb out of the vanguard and find there’s somehow still money in your pocket, or you stagger out of one of those latenight westvillage cafes after a grading binge, all blearyeyed & braincalloused, a coat of cold espresso on your tongue. it’s midnight. the shitstinking evercoming nevercoming subway stands like a wall between you & your bed. so you do that 7th ave shuffle down to 10th street, hang a right & stumble downstairs, hand the man with the cashbox your last twenty & tip your hat to the big zonked grey bombshelter cat in the corner. & lo & behold who should be on the non-bandstand but Wynton Marsalis, like THE Wynton Marsalis, here just because you didn’t know he would be, & he & the other cats are tearing through a “cherokee” the likes of which you haven’t heard since that zootsoot nineteenfiftytwo life you dream about now & then. not that the cats wouldn’t play beautifully without him, but you just know he’s taking them to another level, what with his jazzatlincolncenter halo & suit he looks like he was born in & kenburns PBS/BGO cachet. & then “you don’t know what love is,” nosir, you most certainly did NOT know what love is, not until you heard those long, breathy notes drippp from his horn like the spit you’ve watched bead & fall from another trumpet’s bell. leaky faucets. nights up. feels like every lonely man & woman in the city just turned over in their beds all at once. all you can think is thank GOD this cat still believes in slumming, because you just don’t imagine you forget he can still play like this & there’s a reason the powersthatbe picked him to wear that suit. & what better reminder than to watch him trade 2s with the rest of the cats on that closing blues, & then 1s, & then halves quarters eighths bang bang jockeying around each other while the crowd hooplas & jesus who knows probably the grey cat himself rolls over & yawns. & by the time the waitress with the impossibly red lipstick has worked her way through the people standing in the back with your drink & you’ve tipped her a dollar & she’s thanked you like you just rescued her from the Kraken you know it’s going to be a much longer night than you’d planned. because the set’s over & the night’s young & you’ve fallen in love all over again with this city of midnight fairylands that tramples on your plans & tears up your maps & throws all reason into the sea. & yet somehow manages to put everything just where it belongs. & you in it.