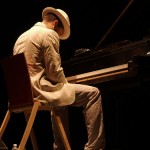 From notes discovered on the last page of my copy of Jane Eyre. Any errors are errors of imagination, and hence not errors at all.

Last Memorial Day weekend I headed down to Alphabet City to hear a solo performance by Jason Moran at A Gathering of Tribes, a gallery-salon on East 3rd Street. A friend of mine in Texas had learned about the show from Moran’s Facebook page—this sort of thing happens more frequently than you might suppose—and forwarded me the link.

Walking down Avenue D that Sunday, with my treasure map cribbed from the internet, I wondered whether Tribes would have AC. It was more like July than May: temperature near a hundred, humidity through the roof. I felt bad for my cats. I felt bad for everybody’s cats.

A few minutes before three I stumbled into the small living room of a second-floor walkup, almost into Moran himself, dapper as ever, in white with his trademark Panama hat. He was chatting with a few people sitting on a big black couch, one an elderly African-American man who appeared to be blind.

It was hotter upstairs than on the street. The people, of course. Hot doesn’t quite capture it, actually. I had abandoned all pretense of civility, was wiping my face with the belly of my T-shirt, which had taken on a Rorschach-like sweat-blot. But then everyone here shone or dripped; we were collectively melting, like dropped popsicles. Maybe this was the meaning of the phantasmagoria on the walls: we were all melting together, and in better weather would solidify as One.

The smell? A mix of noxious volatiles (paint, crotchsweat) and cigarette smoke. I confess a certain nostalgia for the last of these. I wanted to smoke myself, now that every 7-11 was supposed to carry posters of evil-looking tumors while they pushed Nachos, slushees, hot dogs and other such shit on obese teens. At least, until some clever young soul finds a way to smoke them.

When I was sufficiently dehydrated to have lost hope of survival, Moran squeezed past me, heading for the piano. I imagined his passage was eased by my desiccation; I imagined the sweat pouring out of him like water off a mop put through a roller. He took a seat at the bench, swiveled around to thank the gallery’s owner, and then started to play.

Oh, that piano. Brand Kurtzmann. “Upright” is pushing it. Corpses sit upright, I guess, if they’re shoved up against a wall like that. I expected it to go to pieces the moment he started, like a used car kicked by an overzealous vendor. The front panel was missing, so I could watch the hammers lift and drop with the music. Some of them would stick; I waited for them to bounce back. Some would create a split tone, or make the piano ring like a sitar, or dulcimer. Some were just dead. And so even though Moran played a “regular” piano, it sounded like a prepared one … but an inadvertently, randomly prepared one, the detritus of ages littering the cables, time and wear having done the work that a deliberate artist might do. As though passers-by had left trinkets inside, and taken pieces home as souvenirs. This is all the more wonderful when one considers that the piano is supposed to be the essence of a mathematical, regularized sonority.

There was something right about watching Moran from behind. You never, I realized, see pianists entirely from behind in a concert hall or jazz club. They are at most three-quarters turned. But then you never see pianists playing an “upright.” Here, you could watch his shoulders hunch up, his neck disappear, his hands sprout from his body as they crawled toward either end of the keyboard. He had to swivel on his butt every time he wanted to bow, or turn around entirely to introduce a number, which he did with his hands clasped in his lap.

At one point, Moran claimed to have a Kurtzmann just like this one at home, only in even worse shape, so he was comfortable with the instrument. I admit I found this hard to believe. But what he said directly after made me not particularly care. The piano, he said, was guiding him toward what it wanted him to play.

Anyone who has ever tried to play an instrument will understand this. Every instrument—I don’t mean this in the general but in the particular sense—has a character of its own. Every musician has to develop a relationship with his instrument—has to figure out, as Moran said, what it wants him to play, as much as what he wants from it. To conjure the spirit inhabiting those boards and knobs and strings. To steer it like a creaky ship toward some modicum of controlled expression. All musicianship partakes of this sort of animism; the piano at Tribes just dramatized it.

Moran’s comment changed the way I was listening. At the beginning I had been tempted to take the whole show for charity, or an exercise in postmodern pastiche, or a sort of death-match. It was, in fact, all of the above. A big-name jazz player slumming in the “old” East Village, helping raise funds for an ailing institution; a master pitting his technique against a recalcitrant instrument. Certainly there was no hiding in it. Forget about the warm pedaling that allows notes to melt into one another, the whole piano to seethe like an orchestra, that obscures missed notes or uneven trills in washes of sound. Every flaw was there on display. But what I came to hear, too, was a musician listening to the instrument he played, learning from it, until he started to recognize, for example, where those duds and split tones were—and then he might hit them hard, three, four times in a row, the way Monk will badger a minor second or tritone until we can’t help but admire its ugly beauty.

In this light, the performance started to sound like a belated response to Moran’s 2002 solo recording Modernistic; and the piano took on the decayed beauty of an abandoned factory, or ruined amusement park. Only a haunted one. For the mix of tunes, or rather the mixed-up tunes, came to seem selected by the piano, not the performer. Free jazz melted into stride—Butch Morris to Fats Waller—and then, via obsessive repetition, atomized into something closer to minimalism (cf. Irene Schweitzer). Another piece, reminiscent of one of Satie’s Gymnopédies, scrambled into a blues. Even “Body and Soul,” a Moran favorite, took on new dimensions as it was fractured here and there by notes that sounded alternately like glass, rubber balls, and wood blocks. By then I was thinking, That ballad, yeah, the piano definitely wanted that one. Or maybe my ears were just getting used to the endless clinkers and shimmerers, stickers and duds.

At the end of the first set I took a walk outside to cool off and decide if I had the endurance to go back for the second. The trees were all in blossom, misting me with petals as I walked by. The people had blossomed, too, here in the vegas of Alphabet City. A barbecue in every garden and a party on every streetcorner. Every once in a while a skinny white girl would pass me on a bike. Over on Avenue B, a college student was moving in, her parents helping. Everything she owned seemed to be wrapped in plastic. She looked too young for the neighborhood; she ought to be moving into a dorm somewhere, I thought. But then the entire Village is a dorm. Or a frat house.

Near the end of that first set, Moran had said that Tribes was one of the reasons he still lived in New York. I thought of the woman who had offered me a cup of water as I stood leaning on the doorjamb. Melting and listening. Listening and melting. Occasionally I would look over at the blind man on the couch, who did not move for the entire set. When it ended, he said, “Beautiful.” He said it three more times—beautiful, beautiful, beautiful. There was nothing else anybody could say.

I walked around the circle in Tompkins Square, past the street punks and skaters and the people walking their panting dogs—I felt bad for everybody’s dogs, too—and sat down for a minute on a bench. I scribbled some notes on the back page of my copy of Jane Eyre. Then I remembered the second set and started walking back to Tribes.

Addendum, 1.3.19: In the documentary film Richter: The Enigma, Sviatoslav Richter remarks that the worst thing a pianist can do is choose the piano he will play on—as he was invited to do when he played in the United States. “I don’t like pianos,” he says. “I like music.” Better, he says, to leave it up to Fate. Better, as for Jason Moran, to let the piano choose him.

This entry is licensed under a Creative Commons Attribution-NonCommercial-ShareAlike 4.0 International license.

One thought on “Animistic”