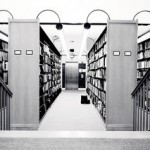 Among my handful of sacred places in New York—those cafés, gardens, and institutional spaces where I can best study, write, meditate, mosey, and otherwise get in tune with the Am and Is—I would include the music library of City College.

The library is housed at the southwest end of that beautiful neo-gothic monument Shepard Hall, a block away from my old Convent Avenue apartment. Shepard is shaped like an anchor, or a flexing cross, with the tall tower at the crown, the Great Hall for a shank, and the library in the half-rotunda where the shackle would be. (In cathedral terms, the hall would be the nave, and the library located under the apse.) The library has two floors, with listening carrels on the second, entry level, and the stacks and reading room on the first, accessed by way of a narrow staircase that turns twice, to the left on the way down, to the right on the way up. The stairs are wood, as is much of the work around the doors and upstairs windows. What with the woodwork, the two floors, and the cathedral environs, it reminds me, fittingly, of an organ. Unlike an organ, however, the library tolerates a charming amount of illogic—the improbably narrow staircase, for example. I don’t think you could get a cello down those stairs, let alone a bass.

I love this library for how small and self-contained it is. I loved the Marriott Library at the University of Utah (where I went to grad school) for the latter reason, and for the same reason feel little connection with the New York Public Library: none of the individual branches are adequate to themselves. The Performing Arts library at Lincoln Center is better in this regard, but still too diffuse … and, perhaps, too well-traveled. The music library at City can get a little busy during exam time, probably spillover from the Cohen, City’s main library. During the regular semester, though, there are rarely more than ten people there at any one time. This space filled with recordings, with notes, and with words about music basks in a near-monastical silence.

The Marriott had the kinds of stacks that rewarded careful, curious, passionate browsing. I would always go in looking for one or a few books, and walk out with a pile. I never wrote down call numbers very clearly—I couldn’t, not with those nubbins of pencils, on those business-card-size bits of scrap paper. So I could only ever get into the general vicinity of a book. And then I would have to browse, not by call number, but by title. Digging around, I would find a dozen other titles, some better than the ones I believed I’d come for. (It’s always more pleasant to ballpark, isn’t it, to have to ask, to get turned around, to play Marco Polo with wisdom. Every good book has a measure of serendipity about it.)

The music library multiplies the rewards for such browsing because it is organized around a single subject, and its collections are the cumulative reflection of the taste, wisdom, and judgment of the librarians and the faculty of the music department at City College, of a century (more or less) of thoughtful scholarship and librarianship.* And so, unlike at the University of Utah, where I used to set off with a half-legible call number for a compass and a walking-stick, a trip downstairs in the music library requires no call number at all—just a good bit of time, a bunch of questions you haven’t quite been able to formulate, and a lot of tunes that never leave your head.

Some days I would pick a stack at random and go through title after title, pulling books off the shelves, opening to the table of contents, or to a random page, in an odd, secular gesture at bibliomancy. After I had gone through a few shelves this way—sometimes all the way down to the floor—I might bring a few books over to one of the carrels under the arched, barred windows looking out onto the quad. For a sort-of basement, it gets nice light, particularly in the spring and early fall, when the sun has begun to go down behind the clock tower, and the light splashes across the tables, sometimes too warm and bright to work in. On those days, at that hour, from the steps of the North Academic Center, Shepard Hall looks like the Cathedral of Ys risen from the waves.

I have sat on the floor amid the stacks, too, my books piled in the space past the metal bookends, stumbling upon bits of musical esoterica—connections between Renaissance music and bird songs; the story behind the naming of Damrosch Park—scribbling down titles for future reference, occasionally taking books out, racking up enormous, humiliating, bankrupting fines, to be paid only after much arguing and whining and weaseling.

At least, at the Cohen. Never here. One must stay on good terms with one’s sacred spaces.

I return my books with pencil marks in them, after I have reached the limit of possible renewals, or have been threatened with losing borrowing privileges, knowing that in a few months, or years, or a decade, when I need that book again, I can go back to the same place in the stacks, find my old copy, and my marks again, and perhaps, finally, take notes, and erase the marks, at least some of them, and so return a clean(er) copy, and begin to set my accounts right with the universe.

I have spent afternoons there, too, my unsanctioned coffee thermos hidden in one of the nearby carrels, diligently plugging away at counterpoint homework, or parsing examples from Aldwell and Schachter, or writing out the first draft of some piece bound for the Pit Stop, or copying articles I am thinking of using for my Writing About Music class … or, of course, grading papers, while students paced up and down Convent Avenue and the shadows of the bars started to creep across the carrels.

And then before I knew it, it would be almost five o’clock: the closing announcement is made, and the blind man—the one I used to see walking to school, arm locked with a friend’s or good samaritan’s—emerges from one of the labs and rings the elevator. At Johns Hopkins, where I did my undergraduate work, the main library would close at midnight; and, if you happened to be there at that hour, you could participate in the pilgrimage across the quad to the “Hut,” the all-night library on the bottom floor of Gilman Hall. Gilman is the only academic building I know that held a candle to Shepard—held, because it was renovated a few years ago, and many of its most fantastic quirks removed. Leaving the music library at five, I could have relived (as farce) this memory by turning left, heading over to the Cohen; the flukes of the anchor may be buried in St. Nicholas Park, but the shackle points toward the Cohen, as though the newer structure were a vessel tethered to the older one by an invisible rope. Instead, I always went right. This much hasn’t changed. The difference is that I don’t live a block north anymore, but a thousand. I can’t see Shepard Hall out my window. But I can still imagine it, tiny and far below me, I tethered not by rope, but by a string, as the kite I cling to dips and flaps.

I suppose part of what made the music library sacred was that it allowed me to try on another identity. If I always crossed the upper floor quickly, making a bee-line for the stairs, maybe it’s because I felt a little like a charlatan, and was trying not to be noticed. Once, when I borrowed the score for the “Waldstein” sonata (for “Of Liszt and Other Ghosts”), the librarian, who directed me to the right area in the stacks, counseled me that these were mini-scores—fine to read, but not to play from. I assured her that I was in no way capable of playing the “Waldstein,” that I merely intended to read it. But even that was a bit of a ruse. I was like a man with a third-grade education walking around with a copy of Ulysses, just so he could run his finger along the lines and mouth the strange words to himself, marveling at the incantatory nature of the language.

* And, of course, the realities of public school budgets. Still, I remember the first time I realized that I, as a faculty member, could request that the library order books. It was a dizzying confluence of responsibility and irresponsibility. I was helping to direct the purchases on which the future of an institution depended. I was standing with a shopping cart at the entrance of a fantasically large bookstore, watching the man with the starter’s pistol.