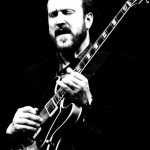 John Scofield has recorded so much and so eclectically over the last few decades that making grand claims about his sound based on the music of a single album might seem suspect. And it would be, were that sound, that musical personality, that Sco-accent, not so immediately recognizable, whether he’s playing funk, roots, fusion or bop. If I choose 1993’s What We Do as my microcosm, it is not because I think it particularly representative, or even particularly transparent. It is simply the Scofield album I know best: the first one I owned—one of the first jazz records I ever bought, in fact—and an album I have listened to with a relentlessness almost worthy of the canonical rock records of my teenage years.

As a composer, Scofield is a master of creating a feeling of spontaneous gravity, of deep but momentary commitment. On first listening, the tunes on What We Do likely seem slight. Even many of the titles announce them as barely-sketched springboards for improvisation: “Little Walk,” “Camp Out,” “Why Nogales?” I’m just going out for a minute. Let’s sing around the fire. Why NOT Nogales? Somehow, these ditties tossed out for the musicians to bobble hint at bigger, weightier things, suggest much more than they say. At once playful and serious, they dance along a surface, dipping a toe in here and there. By meditating on trivial things, they hang on the cusp of revelations. It is hard to think of many jazz composers who have been so successful at wedding the flippant and profound. Monk was another.

This feeling is created partly by Scofield’s approach to melody: sometimes they seem to grow organically under the listener’s ear, notes accreting on notes, as though they were records of the composing process, of the stumbles and turns and cul-de-sacs of the composing imagination. But it is partly the way he plays his melodies, too—or rather, the way he plays, period. These are not paper melodies, sequences of pitches abstractly imagined. Rather, they are a by-product of his approach to the guitar—his touch, his phrasing, his physical relationship to the instrument—in a word, his sound: the almost-timid palpating of notes as he feels his way forward; the sudden, strong accents; the phrasing that keeps him always a little behind, smelling the flowers, while the rhythm section tugs him forward; the discreet use of flange and gain. Simply put, if Scofield didn’t play the guitar the way he does, he would not write the sort of music he does. And if this is pretty much true of all musician-composers, it is profoundly, uncommonly, confessionally true of John Scofield. So many of the melodic kernels on What We Do sound like what comes out of the guitar when he straps it on, when he’s not thinking of anything particularly important, when he’s just passing the time, when his mind is wandering one way and his hands another. The art is in the capture: when those paths cross, unexpectedly—there is the moment of composition. (“Hey, man,” Hendrix mocks the blues, “it’s rainin’ outside, man.” Like Jimi, Scofield watches those raindrops scooting down his window and turns them into music.)

Listen, for example, to the melody of “Little Walk,” the three-note motive that introduces both song and album, transposed down a step, repeated, and then varied more in rhythm and phrasing than in the notes used to form a bare-bones resolution. The melody doesn’t fully appear until the second time through, when the rest of the quartet joins in, with Joe Lovano out ahead on alto.* The first time, guitar alone, each of the notes that form the outline of the melody is shadowed by a low note on the off-beat: brushed, barely audible, coloring the main line with that hint of gain, creating a deep, easy swing that paces the rest of the song. These subtle accents are a hallmark of Scofield’s sound: whispered parentheticals, half-formed thoughts flitting on the margins, ghostly choruses floating around the melody. Or think of them as the consonants or syllables swallowed in spoken language that we hear more with our minds than our ears. There is just such an oral quality to Scofield’s playing, of someone speaking with you—not to you, but with you—about matters apparently insignificant—how to mow the grass, the shape of a dragonfly’s wing—but so intimately and with such subtle emphasis as to touch on things unreckoned. There is a breathiness, too, almost a bowed quality to the dynamics of his playing—again, in “Little Walk,” the unhurried rise and fall of the wedges of melody. It is not cantabile we hear, but conversation: interjections, asides, laughter.

“Little Walk” can serve as a template for the other medium-to-slow cuts on the record. Scofield generally precedes Lovano; when the latter enters, the brunt of the melody is ceded to the alto, the guitar harmonizing with and commenting on the melody rather than simply doubling it, something between a second horn and the traditional comping of a rhythm-section guitar. The gain is always there, shadowing the notes rather than throttling them; but harmonizing like this really brings it out, coloring each moment with the distinct resonances of different intervals, making gain a tool for expression rather than a mere element of the overall sound. Examples abound, but perhaps the most spectacular is when Scofield allows a dissonant, four-note arpeggio to ring together at the climax of the melody of “Easy for You.” (There is more than a little of the blues in this, except that Scofield’s harmonies are more rarified and equivocal than those preferred by blues players.) The melody of “Why Nogales?” is played freely around rather than with the leisurely corrido rhythm (ride-hihat-hihat, 1-2-3), Lovano shadowing Scofield, Scofield Lovano, giving it an almost tipsy feel, as if the two players were each expecting the other to lead through the steps of a slightly unfamiliar dance. It is not a difficult song to narrativize: the slightly drunken haze through which the girl on the other side of the room is cautiously approached; the two inebriated dancers left alone on the floor after everyone else has passed out or gone on home. But like so many of the tunes on this record, there is a triumphant moment when that hesitation (almost) melts away: here a sort of fanfare, elsewhere a boogie, some fiercer than others, some saucier, sometimes with a wink at the listener. While the other slow tunes keep an easy strut through the solos, in “Why Nogales?” the corrido falls in and out; the rhythmic freedom giving Scofield an even bigger sky than usual under which to improvise, and bassist Dennis Irwin after him. When the melody finally finds its way back into the song, it is on less stable footing, at least in its first iteration: the bass plays a new rhythm in seven, drumer Bill Stewart following on bells and rims while Lovano and Scofield stubbornly weave the old melody over the top. Of all the songs on the record, “Why Nogales?” is the most thrown-open, unstoppered; and in its tone of reluctant festiveness, it perhaps best expresses that quotidian through which larger things—beauty, truth—are unexpectedly, unbelievingly glimpsed. Its position one track from the end of the album makes of it a suitably understated climax.

What We Do does have several more assertive songs played at a faster clip: good-natured, straight-ahead, long-lined romps like “Call 911” and “Say the Word” and “What They Did.” But tempo aside, the “Nogales” feel remains. The burner “Camp Out” extrapolates on “Hello Mother, Hello Father (A Letter from Camp)”: inches upward, fails … then tries again, with a bit more decoration, before arriving at a sort of bugle call, harmonized in major thirds, and then plummeting octave-five-one to begin the climb anew. It is all here, again: the hesitant step; the unanticipated, perhaps mock-epic triumph; the unassuming (even goofy) fragments that add up to more than their sum; the wide open sky for improvisation. In other tunes, it is the variability of the length of the pieces of the melody that creates this feeling, each bit pushing a little further or stopping a little shorter, and in the oddest places, making them difficult to follow or play along to.

All these hallmarks of Scofield the composer translate into his soloing as well. The songs on What We Do all have traditional two-part heads and traded solos, but the way he riffs on the melodies, parodying or worrying them, changing one note out of three or phrasing them differently, furthers the improvised feel of the whole. The preponderance of short phrases, and the gaps between, make the extended runs that much more satisfying when he gets to them: you want to see how long he can surf the wave before he runs out of ideas, or frets. And then he’ll tie off these long, often very symmetrical but harmonically screwy runs with a bluesy tail, or a pinky trill—a sort of punch line to bring himself back into the harmonic fold. There are coloring notes aplenty here, too, with a penchant for seconds and sevenths, Scofield savoring the way his mild distortion resonates in these dissonant intervals. Sometimes, he will build from smaller to larger intervals with descending and ascending lines on adjacent strings, another example of gain serving an expressive moment. Nor is gain the only effect employed with artful infrequency. The flange rears up now and again as well: the disintegrating clang (amp coils?) while he comps Lovano’s solo in “Little Walk”; the trailing off at the conclusion of “Easy for You”; the Hammond B3 sound as he hoists a chord up the neck while trading fours with Stewart on “What They Did.”

In hindsight, I wonder if there’s something a little selfish in my attraction to John Scofield. He is one of a handful of guitarists who play in a style I aspire to, who make something lasting out of the sort of noodling I do whenever I pick up the guitar. Not the melodies I sing in my head but cannot quite realize, the sort of thing Hendrix cherished. No: my hands. This is an important distinction. My connection to Scofield is more physical, muscular; a sense of touch and phrasing unites our sensibilities. Those major sevenths with all that beautiful gain, pointer and ringfinger, strumming with the intervening string muted; the simultaneous descending and ascending lines on adjacent strings; the scoops upon scoops—did I play them first, and then hear Sco do it better? or was it him who started me on that trail? I can’t remember. And it doesn’t really matter. Scofield is the groove I’ve always wanted to fall into. His hands speak something about me I can’t; listening to him sets me more clearly on the path to myself.

* Lovano has a similarly light touch, scudding over notes on the slower tracks—listen to the way he enters on “Little Walk” or “Big Sky,” the way his notes mist in over the ground Scofield has ceded—or, on the more ribald “Camp Out,” how he comes tripping in over a ricocheting snare, as though a door were flung open at the top of a stairwell inside a listing vessel, and here comes Lovano, stumbling opposite Scofield’s exit, wearing his tap shoes. I probably shouldn’t bring in Monk so gratuitously, but in Lovano Scofield finds his Charlie Rouse, his perfect complement.