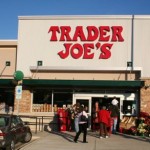 My mother is in the car. My father is at the post office, which is housed in a building indistinguishable from the businesses in the rest of this strip mall. I am at Trader Joe’s, or, as my mother called it until quite recently, Traders Joe—a Spanglishism that results, I would guess, from hearing possessives as plurals, and perhaps from a tendency to confuse the order of parts of speech, as in abbreviating shopping mall as el shopping, or calling The Rolling Stones Los Rolling. That she has at last learned the correct name of this grocery store is, to me, a more potent demonstration of Americanness than her citizenship.

From the second handicapped parking spot I could already hear the music, some song by Los Rolling I didn’t recognize; and now here I am, jutting my chin to Mick and the gang as I dig through the cornucopia of snack mixes—Tempting Trail Mix, Go Raw Trek Mix, Rainbow’s End Trail Mix—in the guiltless banana republic, the outpost of some sunny SoCal empire, that is Trader Joe’s. Shopping here is a cross between safari and beach vacation; I feel a tiny bit colonial, but innocently so. Perhaps it’s because every aspect of the experience is as managed as a Disneyworld ride, up to and including the adorable hippies in Hawaiian shirts carrying signs the size of butterfly nets and restocking shelves with Trader Joe’s products, or one of its cutesy ethnic variants, as recognizably Traders Joe as the Lone Ranger with that teensy-weensy mask stretched over his eyes. The employees at the registers seem a bit too old to be working here, and a bit too cheerful. In fact—again reminding me of Disney—everyone is a bit too cheerful, to the point of seeming a little on edge, so that I can’t help but scan their eyeballs for an amphetamine shiver. And maybe that’s why, despite the crate-and-burlap kitsch of the decor and the lockstep branding of the products and the Pangloss vibe of the staff, shopping here carries a whiff of adventure, of potential danger.

Or maybe it’s the rock-n-roll. Digging through the nut mixes, it occurs to me that the music is a little loud—at least, a little louder than I am accustomed to in such an environment: the blow-up cushion of smooth jazz on which I float at, say, Kroger, or ShopRite, or the yoga-mat silence of Whole Foods. Clearly, the music is a little too present; I have—God forbid—paused to listen, to think, I don’t know this Stones tune, to wonder if I am too disdainful of the British Invasion, or just plain ignorant. I am thinking about The Stones rather than Fancy Mixed Nuts, or any other of the almost-equally-desirable snack products with which it competes, filling the shelves before me. The music has ceased to serve its function, that is, to focus me on and funnel me toward consumption, to create a hypnogogic state conducive to the dreamlike spending of money.

But this is nothing compared to what awaits me around the corner, past the well-ordered meat and dairy items and brightly-packaged vegetables, past tortillas in all the colors of the Mexican flag. The Stones song ends, and on comes Foreigner’s “Hot Blooded,” same volume, but seeming louder—that middle-of-the-dial, talk-jock in-your-faceness, the sort of shit Clear Channel has used to pave our cultural interstate highway system. On classic rock stations across the country, the same Foreigner tune, at the same hour, like church bells reminding the faithful to … well, to what, exactly?

I’m trying not to dawdle. But for all these products in their open freezers, like bleachers full of adoring fans, wanting me. Worshipping me. If they had their way, I’m sure they would strip off their packaging and jiggle their contents at me, before jumping right into my mouth. Bananas might as well be in an alternate universe.

Do they hear it? How could they not? And when some stripper with a ‘70s haircut and pasties thrusts her hips into my imagination, fingers laced behind her head … do they see what I’m seeing? (My God, where did that come from?)

By aisle three I am beginning to feel just a little goofy, to the point that I wonder if I’m participating in a psychological experiment, or some Candid Camera-style TV program. An elderly woman blithely pushes her cart toward me, a blissed-out expression on her face, reminding me of the mall walkers I witnessed just an hour before—my first encounter with said species, I am unaccustomed to malls, they induce in me the sort of vague dread some people feel when you say the words “uranium enrichment tubes,” or “marriage equality.” Beyond her is a young mother with a toddler, the toddler pushing a toddler-size shopping cart, mom probably a toddler when this song came out. And all the while, Foreigner continue to stroke themselves through the PA:

Are you … hot, mama? Are you old enough? Is my timing right? Did you save your love for me tonight?

Man, seriously? I feel like Kevin McCarthy at the end of Invasion of the Body Snatchers, I want to scream, Don’t you hear it? Doesn’t everybody hear it? Like I’ve been hurled up to the ceiling, to look down on my shopping self from among the festive, half-tumescent beach balls, loudspeakers blaring beside my ears.

Instead, staring intently at the coffee (organic, shade-grown or bird-killing, nature-despoiling: it’s up to you), I start to giggle.

It’s about time, though I’m not entirely sure if it’s victory or surrender. And then I feel self-conscious, again. For even though it’s okay for the employees to laugh—it’s probably listed in their job duties—it feels wrong for me. I almost expect someone to come and, smiling, lead me out of the store by the elbow.

I reach down and squeeze my bag of Fancy Mixed Nuts, feeling the air inside the package push threateningly against the seam; and I vow that, though I must walk the gauntlet of every item in this store, I will make it to the bananas, I will return with them to the car by the time my father is out of the post office.

Besides, I have to know what brand-stamped global treasures the next aisle might hold. What desires will I discover? What half-naked natives will I see dancing when I spread apart the plastic leaves? This: Reduced Guilt Kettle Chips! Right next to the South African Style Potato Chips! Hilarious ironies of product placement! And this: Giant Peruvian Inca Corn! Who knew such a thing existed? And how did they get these giant Peruvians into the country?

And look at this: Cookies and Cream Cookie Butter! So much for reduced guilt! Indeed, Foreigner informs me that we can make a secret rendezvous. But before we do, you’ll have to get away from you-know-who.

Slowly, I return the cookie butter to the shelf.

It ends better for Foreigner than it does for me. The bananas, in the last spacious, bright aisle, are a letdown. A little bit spotty. A little bit green. Even the guy at the register seems disappointed. Like he was expecting more from me. He’s supposed to smile. He rings up the bananas and the Fancy Mixed Nuts. I pay with a credit card.

Maybe Muzak just doesn’t cut it anymore, at least for post-boomers and geriatric hippies: a more vigorous genre is required to prod us up and down the aisles. Still, you would think the irruption of the crass sex anthem that is “Hot Blooded,” intended to be consumed by stadiums full of delirious teens, into the pristinely-ordered, tightly-managed grocery-shopping bonanza that is Trader Joe’s, would do some sort of damage. Except that Foreigner are about as dangerous as gluten-free toaster waffles. And this has nothing to do with some historical transformation into retro-hip, or embarrassing kitsch, or “classic rock,” or a Tom Frank-style conquest of the cool, where, say, Bob Dylan or Los Rolling have been appropriated (inasmuch as rock ever needed to be) to sell Coke or credit cards. Nein. Foreigner were born fully assimilated. “Hot Blooded” was castrated at birth. 1978 was the year George Romero’s zombies invaded the shopping malls, the year mass consumption finally found its appropriate metaphor.

It’s the titillation of adolescence teetering on the edge of forbidden knowledge, the fantasies of sexual abandon and mastery, that we consume, in tightly-controlled environments of endlessly-proliferating commodities—songs, noodles—packaged to look diverse. Wandering up and down aisles, sitting in traffic jams, scanning the statistically-selected music on devices that obsolesce before our eyes, all the well-ordered routines of late capitalist life, cookie butter rebels toggling from stadium to stadium, store to store, dry hump to dry hump, as guilt-reduced as the coupling of rock star and groupie, over and over and over again.