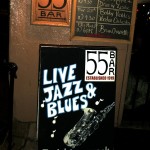 The first time I went to the 55 Bar (on Christopher Street just off Seventh Avenue) was probably late 1992 or early 1993. A friend of mine living in Weehawken and working in the City took me to see Mike Stern, whose trio played at the 55 every Monday and Wednesday. It was eight dollars a set, and although it seems ludicrous today, I’m pretty sure that included two drinks.

Stern was my initiation into the New York jazz scene, and I could hardly have asked for a better one. A one-time Miles Davis sideman, Stern plays a sophisticated fusion, a cross between the Al DiMeola “more notes!” school, which my guitar teacher, trying to get me to sublimate my heavy-metal urges, had guided me toward as a teen, and the bebop and post-bebop jazz that I had only begun listening to the previous year, while living in Madrid. I had bought my first jazz discs only months before, to supplement the Art Blakey and Thelonious Monk I had taped off an Australian friend in Spain. It was a fittingly cosmopolitan introduction to the music. Now I was back in the States, and for the moment in the New York area, and I was eager to start digging into jazz at its source and mecca.

Stern generally opened his sets at the 55 with a long, driving standard that built slowly from shuffling, chorus-infused lines to a blues-rock-funk climax. At some point along the way the drummer would trade his brushes for sticks, the bass would stop walking and start stomping, and Stern’s pick, which he’d been using like the drummer had his brushes, would begin to bite. During this rising action you could pick out the guitar-heads on their 55 pilgrimmage from the drool on their chins. They were all sitting on their hands, waiting for Stern to hit the overdrive and start wailing.

The slow movement of the set Stern would begin and end solo, fingerpicking, accenting the rounder tones he could get from his Telecaster, a guitar more often associated with country music. The “Tele” probably helped him to split the difference between the overdriven twang of his rock soloing (a Telecaster, after all, is just a one-horned Stratocaster) and his quicksilver bop … as well as to avoid the bulbous sound that players using similar effects often get from their big hollowbody Gibsons.

As for the last movement, it would return to something like the original allegro, though a bit louder, a bit funkier, and featuring an extended cadenza for the drums.

Of all the many tricks Stern smuggled in his deep pockets and up his ample sleeves, my favorite was when he would pick a single note on the high “E” string in swung triplets and interpolate chords on the upbeats. It’s an effective technique for crescendo: the chords zigzag up the neck; after a few bars, the repeated note will move up a third, say—higher ground on which to build another set of relentlessly-climbing triads. The effect is almost pianistic, with the contrast between the insistent high note and the shifting chords generating tension. When the passage was over, Stern would be someplace other than where he began—further up the neck, certainly, but on a new emotional plateau as well, although maybe not quite ready to hit that overdrive pedal. It’s a technique that fellow New York guitarist Ron Affif would take to its logical conclusion, quadrupling the speed of the high note to a mandolin-like tremolo, while reducing the accompaniment from a chord progression to a melodic line. In both cases, technique acts as a signature: it announces the musician’s identity as surely as a composer’s name coded into a score.

I remember how Stern used to look when he came in: hair unkempt, face unshaven, wearing a nondescript grey shirt and jeans and holding a diner coffee. He looked like he’d just gotten out of bed, which he might have; and truth be told on some nights he played like he was still asleep, or had woken up on the far wrong side. The waitress would rip our tickets in half (I say “our” because I’ve tried to repay the favor done me and take as many friends as possible to see Stern), and while we drank our first drink we would watch the musicians filter in, greet the people they knew, and chat while they set up their gear. I appreciated the lack of pretension, and the lack of distance between the audience and musicians. In itself this was nothing new: I’d been catching rock acts at small to mid-size clubs for a good five years, and more than once I’d stuck around to chat with bandmembers, whom I generally found to be down-to-earth and eager to discuss their music. But this was something more: a fantasy of being in the musician’s workshop, like one of those all-night jam sessions at the old Minton’s, although for what I knew at the time the comparison is anachronistic.

I always figured the 55 barflies hated those Monday and Wednesday nights, when the tourists and so-called bridge-and-tunnel crowd would pack that little bar to the gills, the acolytes crowding a foot away from the head of Stern’s Tele and jamming up the doorway to the bathroom behind him. The waitresses had to do pirouettes to get drinks to the tables. In this respect Stern’s appearance was apropos: the 55 was a dive, and proud of it. I’m sure they welcomed Stern for the same reason The Tower art theater in Salt Lake City held over the hit sports documentary Hoop Dreams for months on end: even at eight dollars a head, he paid the rent.

It’s the early-nineties décor I remember best of all. One painting in pastels showed a woman doubled over the back of an armchair. At the top was the injunction to “practice safe sex”; at the bottom, much larger: “FUCK A CHAIR.” Next to it was a mural-sized painting of a group of American presidents at a sort of Last Supper, with Reagan in the place of Jesus, a miniature mushroom cloud rising from his plate.

Besides the price, the pictures are about the only thing that’s changed at the 55. I miss them. Today, the walls are covered with the clichéd jazz-and-blues memorabilia you can find in any club: smoky, heavy-chiaroscuro portraits, iconic photos of Miles and Robert Johnson, “A Great Day in Harlem,” Blue Note album cover reproductions. It’s a small but significant difference: the 55 has gone from being a bar where jazz was played to a jazz bar. Maybe noplace can withstand a regular gig by an internationally-known musician for long without changing in some fundamental ways. But in a broader sense, what’s happened to the 55 is indicative of what’s happened to New York City as a whole, which for the last couple of decades has been busy draining itself of all its wonderfully garish “local” color, and repackaging itself as one more franchise in a global urban chain store, drawing liberally on its own myths to manufacture a brand identity.

I still go to the 55 a few times a year, though it’s been a while since I saw Stern, who still plays there Mondays and Wednesdays, just less regularly than he used to. Wayne Krantz was my surrogate Stern for a time, but his invigorating Thursday-night sets have (sadly) come to an end. Of all the other great music I’ve caught there recently, I wanted to single out the last time I saw Chris Potter, in part (but only in part) because it makes for an interesting counterpoint with the 55 of yore (at least my yore).

Like Stern, Potter is a rent-payer, and the crowd was the typical mix of music students, locals and tourists. By the time I arrived, there wasn’t a seat in the house, although several people were being instructed to sit in places where there seemed to be no available chairs. The waitresses were engaged in their usual calisthenics, and drinks were being passed like buckets in a fire brigade. The bar itself—I mean the wooden thing you lean against and set drinks on—was packed two deep all the way down, with the biggest crowd, as always, next to the band, making it well-nigh impossible to get to the bathroom before the set’s end.

I took a spot against the back wall, right by the door, standing with my feet slightly parted and my backpack clamped between my shins—there wasn’t even room for it on the floor next to me. It was actually the first of several elements that conspired to make the night’s set one of those quasi-religious experiences that recorded music simply can’t reproduce. There’s nothing like a little pain to get you in the mood for spiritual uplift: ten minutes of standing with my backpack between my knees, and I was ready to sink down on them and beg the God of Music for a speedy deliverance.

Add to this that it was one of those school nights when I shouldn’t have been out at all, had snuck down to the Village in spite of my conscience and better judgment, reading papers on the train in both directions. In this sense, Music was not only my god, but my mistress as well, and I was at once martyr and sinner. Who knew what my partner would find on my collar when I got home?

As for Potter, he stood facing me at the other end of the pub, as if he were my mirror image, or I his. He seemed to stare at a spot directly over my head while he played. And I couldn’t rid myself of the idea that he was playing for me, and only for me—this despite the acolyte who stood almost directly behind him, also facing me, whose face I watched from time to time, and whose changing expressions I began to mirror, as if I could make his emotions (surprise, wonder, pleasure) my own.

And as for the music Potter played … well, this was almost a year ago; I couldn’t name you a single tune. I couldn’t even tell you who his band was. But that tone … that tone! For Potter was channeling Rollins that night, his big sound poured, and poured, and poured, until the bar ran over with it. It pinned me to the wall more than any crowd could. And it swallowed me, as sure as Jonah was by the whale. Except that unlike Jonah, I wasn’t fleeing the Lord; I’d boarded that boat hunting Leviathan as much as any Ahab, had stayed on deck through the gale, waiting for Him to find me. And when He did, and opened His mouth, I held my nose and jumped in.

A closing observation on the Potter set: Depending on the tune, the bartender would turn the AC on or off. A ballad, and the AC would go off; a burner, and the AC would come back on. I just can’t imagine this being the case twenty years ago, before the music was put on an altar. In fact, I can’t imagine the 55 had AC at all, though I’m sure it did.

Then again, clicking the AC off for a ballad is really only a stone’s throw from FUCK A CHAIR, isn’t it? This little pub-that-could has worked hard to brand itself as a cross between Dizzy’s and dive bar, a place to slum with the anointed. The altar is made of plastic.

And then again, who cares? Altar or no altar, plastic or solid gold, old New York or new, the music has stuck it out, even thrived. The wood paneling may smell like cigarettes, but there’s music there, too. Put your ear to the wall and you’ll hear it, like the sea in a shell.

2 thoughts on “Paying the Rent, Now and Then”