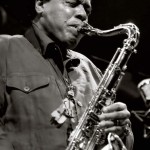 Jazz music thrives on the tension between composition and improvisation, the planned and the spontaneous. As a listener, depending on the song, or on my mood, or on just about anything, really, I might find myself listing away from the latter and toward the former, impatient with whomever happens to be soloing, anticipating the ever-prodigal melody. There are a few albums that stand out in this regard—albums where the tunes are so strong, or their arrangements are so interesting, that the solos become an extended tease. Jackie McLean’s Jackie’s Bag immediately jumps to mind; so does Wayne Shorter’s Adam’s Apple.

Shorter is a well-recognized composer, and “Footprints” is among his best-known compositions, so I’m hardly going out on a limb by singling it out. But I want to focus here not on the song as a whole, but on the way each section of the melody resolves, or rather fails to resolve, and attempt to analyze how this feeling of suspension is achieved.

The key word here is attempt. Because, honey, I don’t do this sort of thing very often. But “Footprints” is low-hanging fruit, and as Shorter’s album title suggests, I am a victim of temptation. True, I don’t approach the Tree of Shorter entirely naked … but nearly so, armed only with my Harry Dexter’s Harmony-Theory Pocket Book (in which I never made it to the harmony section), and the tatters of know-how that still cling to me from my years of guitar lessons.

In an effort to commit as few glaring errors as possible, I also did some cursory internet research and read the album liner notes. Was that a muffled scream I heard from the librarians? Well, some of the finest writing about music can still be found on the fungusy backs of records, and in those little booklets you get with the now-vanishing media called compact discs. This time, though, the notes didn’t help much. They label “Footprints” a blues in 6:8; one of my internet sources calls it 3:4; to me, that’s six of one and a half-dozen of the other. (Actually, I agree with the liner notes.) They also note that the version Shorter recorded with Miles a year later (on Miles Smiles), actually the first version I heard, “recast the rhythmic terrain.” Then they compare Herbie Hancock’s playing on Adam’s Apple to the John Coltrane quartet. But nothing about that beautiful, tantalizing, troubling cluster of notes and times that haunts me on each listen, and that I am desperate to understand. So let me do what I can, stepping as carefully as I can, making sure to overcomplicate matters wherever I can, as all academics have a duty to do, particularly when one is outside one’s field, or when one doesn’t have a field, as is my case, creative writing being less a discipline than an excuse.

“Footprints” begins with four bars for the rhythm section, in each of which the bass and left hand of the piano (that is, Reggie Workman’s two hands and Herbie Hancock’s left one) play an ascending C minor arpeggio: four evenly-spaced notes ending on the minor third (C-G-C-E flat). After holding the E flat for two beats, the piano repeats the tonic on the last beat of the measure, although higher up on the keyboard. The fact that the third (the E flat) lands on the accented fourth beat brings it into relief, as does the time lavished upon it. In this regard, the tonic feels almost like an afterthought, or a foretaste of the next go-round: that clipped high C is really the first note in a skip down to the opening low C of the arpeggio (C-G-C). In addition, Hancock anticipates the E flat by half a beat with a chord, which, although not entirely penetrable to my ear, seems to include a B flat and a D. It is the D which most interests me: a half-step from that heavily-accented E flat, and arriving a half-beat before it, lodged between the tonic and third of the C minor, the D sets up a sort of oscillation in pitch and rhythm that Shorter’s horn will shortly (sorry) recapitulate, and extrapolate upon. Drummer Joe Chambers also has a role in creating this tension: he sometimes accents the fourth beat, sometimes the half-beat before it, with a strike to the high hat or a cymbal.

Shorter comes in at the beginning of the fifth bar. The A natural in the melody flavors the C minor with a major sixth (which, if I remember correctly, is a legit note in the so-called “jazz minor” scale, and according to Mr Dexter, in the ascending melodic minor … which may be the same thing). Or, if you prefer the relative major, the A natural is a sharped fourth—surely what lends the melody its air of loafing intrigue. The rather insistent A natural, however, suggests that the tune is not in C minor (or E flat major), but rather G minor (or B flat major). Again, what strikes me here is the D, which is where the horn pauses, like Hancock’s chord, before coming to rest on another clipped C. The D-C figure is repeated three times in the first part of the melody, twice in the more extended (and A natural-heavy) second, always with the accent on the sustained D. Rhythmically, Shorter also fiddles with the half-beat discrepancy. The first time he plays the figure, he tends to reach the D at the same time as the bass reaches the E flat, and then anticipates the beat on each repetition. And he loiters there, as if to idly threaten the harmonic terrain around the bass’s E flat. Perhaps the combined tension-resolution I hear is a war of thirds: the D is the third of B flat major, the key of the melody, and the E flat is the third of C minor (the second chord in the harmonized B flat major scale), where the bass remains for six of the opening eight bars of the melody. Interestingly, had Shorter chosen an E flat instead of a D, the melody would sound much more like a traditional blues, clearly walking down a well-trodden C minor pentatonic. But the A natural throws a wrench into this; the D becomes a natural pausing place.

The third part of the melody is interesting for the way it flirts with a new key (although I guess no moreso than the bridge of “Rhythm” changes): a G major triad precedes the reintroduction of the B flat; and, after an exhilirating perfect-fourth leap, the melody slinks down chromatically to an F, which fades from the horn without returning to the D … at least, until the head is played through a second time.

Things get a lot weirder this second time around. First, Shorter adds a trill—one YouTube guitarist who demonstrates the tune nicely calls it a “flutter”—at the end of each of the three parts of the melody. The horn, then, takes up that oscillation between the E flat and D, between bass and piano, between Hancock’s left and right hands, reinforcing the half-step quiver in the melody. Second, and even more thrilling, is the appearance of another trill at the same moment, but lower, quieter. It can only be the piano, but sounds more like a phantom string section. It creates a sort of aura around Shorter’s trill. But it is too entangled with the concurrent sounds for me to fully distinguish it; to the best of my ability, it sounds like a trill between B flat and B natural. Whatever it is, it reinforces and multiplies the overall feeling of hazy suspension.

Finally, in the second time through the third part of the melody, Shorter does not let the F fade, but returns, as if compulsively, to the D-C figure.

I didn’t take my school’s equivalent of Philosophy 101 until my senior year, and when I remember this I can’t help but sympathize with those students of mine who manage to avoid taking Expository Writing until their graduating semester. In my case it was partly because I spent two years as a physics major, and after making the switch to the humanities, I found myself with all sorts of new requirements to fulfill. In philosophy we read Plato, and Spinoza, and Hume, and William James’s Pragmatism. I remember running into the professor on the upper quad one day and walking with him, telling him that had I taken his class in my first year rather than my last, I might have ended up a philosophy major. He took this in good humor, though I doubt he believed me.

In one class, the professor said something to the effect that, while neurochemists could tell us that “love” is what happens when neuron A is excited, and in turn excites neuron B, etc., from a philosopher’s standpoint they would have told us absolutely nothing about love. In hindsight it seems like a somewhat facile point. But it is also a point I probably needed to hear, and hear when I did. And not just me: Here was a university stuffed full of proto-scientists and engineers. We were besotted with the scientific worldview; I doubt that many of us ever raised our heads from our textbooks to consider the ramifications of what we were studying, or the alternatives. By my senior year, my humanistic consciousness, that radically different armature for coming to terms with the world, was just beginning to develop. Probably this is why the idea stayed with me, why I chewed it over for years after that lecture, resisted it, came to terms with it, repressed it, resisted it anew, and on and on.

The connection to this post is probably obvious. I can analyze the music, or attempt to analyze it. Quite possibly what is happening at this moment of “Footprints” is not so theoretically marvelous as I take it to be. But were I to be enlightened, I doubt it would change the way my ear perceives that cluster of notes, timbres and rhythms, all of them slightly off from each other, vibrating in ecstatic equipoise. The transcribed notes, and the card-house of intervals they momentarily erect, cannot reproduce the act of listening (although I am aware that many trained musicians can “hear” a piece by reading a score), any more than these ridiculous little grey marks on the screen in front of you can resurrect that experience.

A colleague of mine likes to goad me by saying that writing about music is impossible. Impossible it’s not, but pointless it may well be. One feels that “about” very keenly: the words circle the music, never landing. By the time I finish a post, the music has receded, the words have risen like a tide to swallow it, and all I can do is close the lid of my computer and go put on a record.