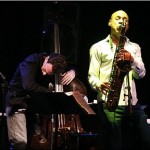 In the Joshua Redman chapter of his lovely recent book The Jazz Ear, Ben Ratliff—apparently paraphrasing Redman—writes, “Great bands, more than great individuals, make jazz matter in the larger culture” (135). Redman argues that Coltrane’s quartet functioned as a unit and a whole, rather than as a platform for the leader (Sonny Rollins is the foil here). “I think the most interesting jazz these days doesn’t take the form of a soloist backed by accompanists,” he says; “it takes the form of a group interacting, improvising together” (136). Ratliff believes this attitude extends beyond Redman, to “many musicians of Redman’s generation … [whose] Rosetta stones are bands, not individuals.” Interestingly, the bands Ratliff goes on to list are Miles Davis’s, Bill Evans’s, and Ornette Coleman’s from the ‘60s, and Keith Jarrett’s from the ‘70s—this though Redman’s original list included Tortoise and Led Zeppelin. (That’s the gambit of The Jazz Ear, by the way: Ratliff asked a bunch of musicians to pick pieces of music they wanted to talk about, and then interviewed them while and after listening.)

Born in 1968, Redman is just a year older than me; I am “the broader culture” for which the Coltrane quartet “matters.” So Redman’s comment, and Ratliff’s gloss, got me thinking about the special resonance bands have, not just for musicians, but for listeners of my generation.

There are a couple of contemporary jazz bands (Masada and The Vandermark 5) that I love unreasonably. I think this is so because they act as surrogates for those rock bands I once loved unreasonably, their logos etched across my cortex. If you were to take one of those porcelain phrenology heads and substitute ANGER and CREATIVITY with IRON MAIDEN and PINK FLOYD, you’d have a pretty good representation of my one-time mental life. There is an element of nostalgia at work here, of course: my taste may have matured in fits and starts, but I still carry along the residue of a desire; and, since it seems harder and harder to cathect rock bands with anything like the same intensity I used to (though with a few I’ve come close), the old energy, which I imagine must be conserved, is transferred to other genres.

I don’t say this to disparage the music or musicianship of either Masada or the V5. Both bands beautifully embody Redman’s concept of “a group interacting, improvising together.” I’m trying to identify something in excess of the music—a supplement, an aura; an ethos that coheres as a sound. In this respect, it’s not just the gestalt idea that the sum of the playing is more than its parts. That is true of any successful ensemble. Rather, the charisma of the band radiates at once from a persona or identity created by its distinctive, collective voice, and from the contributions of each of its members, in whose individual identities the persona remains intact and present. This persona is eminently marketable, and circulates as much in images, concepts, narratives, etc. as in sounds. It is most marketable, for reasons suggested above, to listeners of my generation; and above all, to male listeners. I’m not sure why; all that shared sweat and camaraderie, I guess. Life as one long Howard Hawks war picture.

It’s not just jazz bands. I came to string quartets on my own, in my twenties, my parents’ taste being focused around piano, orchestra, and combinations thereof. Can I discount the impact of my generation’s popular music on my gravitating toward the chamber ensemble? Do I really need the Kronos Quartet to play Metallica and Meshuggah for me to figure this out? Why else would I be able to name every member of the Emerson Quartet? Do you think they’d hire me to do their logo?

As the cult of the soloist gives way to the dynamic of the group—at least at this point on the helix of cultural history—I can’t help but wonder if the big band, with its greater focus on composition and arrangement, and its often tightly-controlled and thoughtfully-ornamented circumstances for improvisation (I am thinking of Maria Schneider’s comments here, in another chapter of The Jazz Ear), is also experiencing a resurgence.

And then can the orchestra, that nineteenth-century musical equivalent of the jumbo jet, be far behind?

For my part, I can’t imagine it. Excepting the orchestral works with which I bonded in my teens—the symphonies of Beethoven and Brahms, the tone poems of Richard Strauss, a number of piano concertos, a handful of other pieces—I find it harder and harder to suspend my disbelief before the orchestra. I said something in a previous post about a culture of distrust, and I can’t claim to be immune from it. Why belabor with a string section what can be said by a single violin? The orchestra’s size and grandeur seem unsuited to audiences today. Spectacle has moved to the arena and the cinema—and the orchestra with it, to the limbo of film scores and playing backup for heavy-rock ballads. If I ever get around to exploring the symphonies of Mahler, Bruckner, and Shostakovitch, it will be for my own edification … which is another way of saying that I don’t expect to fall in love. (But I’m happy to be surprised.)

Undiscovered string quartets, on the other hand, retain the potential to move me greatly, both intellectually and emotionally. Again, there is an element of emotional memory at work here that can’t be discounted. To my ear, though, quartets and similar-sized groups (octets are pushing it) work with a manageable number of voices, timbres and rhythms for my ear to parse. As with the band, I can simultaneously appreciate both the discrete threads and the fabric. And to the whole can be assigned an identity that is neither individual (soloist, conductor, or bandleader) nor a faceless mass (the collective of the orchestra).

Maybe it’s an issue of the performance ethic, too. Interaction among members of an orchestra is always filtered through the conductor, many of whom have reputations for being disciplinarians. (The same is true of big band leaders.) My impression is that the history of the orchestra is as rife with mutinies and desertions as naval history. According to a trombonist friend, orchestra positions have a job satisfaction rating on a par with working at a toll booth. Last year when I was in Houston visiting family, the orchestra was out on strike. True, both an orchestra and a quartet have their first violin, but their jobs aren’t really comparable. An orchestra’s first violin seems like a bureaucratic post. Meanwhile, if you’re the Emerson quartet, you can always trade first fiddle down the middle: three Bartok quartets for Drucker, three for Selzer.

Then again, maybe it’s just that my ear has been ruined by digital recording. The warm distortions of vinyl always helped the orchestra’s sound cohere into a mass; and it was the mass, not the individual voices, that made the orchestra compelling.

Sometimes I imagine the string quartet like the first mammals in those Charles Knight paintings of prehistoric life, when the paradigm that dinosaurs died of their own lumbering ineptitude still held sway. Small, supple, adaptable little critters, emerging from behind the stumps and grasses, ready to lay claim to their evolutionary title. Maybe Disney got it right, in Fantasia, when they made of The Rite of Spring the dinosaurs’ death-march. It was an image of the age of the orchestra coming to a close.

3 thoughts on “On Bands, Very Large and Very Small”