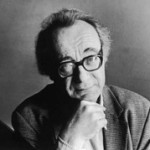 I wrote a version of this a couple of years ago on the occasion of Alfred Brendel’s final performance (Carnegie Hall, February 8th, 2008), but never had anyplace beyond a drawer to stick it. I’ll occasionally be revising and posting older pieces, particularly during these, the most relentless times of the semester, when I seem to be able to start things but not finish them. FYI, the posting hiatus is also partly due to my computer having gone kaput. A reminder to all ye who pass this way: have ye backed up your files recently? Well, have ye?

I was watching Alfred Brendel’s final performance when it occurred to me that, were we to cross paths on a busy sidewalk, there is a good chance I wouldn’t recognize him. In person, I’ve mostly only seen the top of his head, so that when I try to call him up to my mind’s eye, his face appears foreshortened, all wrinkled brow and wispy hair. For me to recognize Brendel, I thought, he would have to approach me with his head bowed and cocked to one side—a posture that might seem obsequious, or threatening, or just plain ridiculous, depending, I guess, on his speed.

Then it occurred to me that I would recognize none of the pianists I had seen at Carnegie Hall over the last thirty-odd years, except as imagined above. Like a helium balloon, I have always managed to stick as close to the ceiling as possible.

It’s a money thing, of course. Buying better seats would reduce the total number of concerts I could attend. This was always my father’s argument; I grew up, in a sense, in the Balcony. (An old joke, at least in my family: “Romeo, Romeo, where art thou, Romeo?” “In the Balcony—it’s cheaper!”) And though I may not have two kids or parking or tolls to pay, the ledger-book approach to classical concertgoing has remained my rule of thumb into adulthood. My standard line at the Carnegie Hall box office at the beginning of every season: “Balcony” (which, since I am not a subscriber, implies “Upper Balcony”); and, for piano, “Lefthand side.”

But the financial justification always carried with it an elaborate sustaining mythology: those of us who sit in the Upper Balcony know music in a way that those who sit below us do not. The inhabitants of the Orchestra are as spiritually and intellectually bereft as were their Gilded-Age forebears who occupied the boxes on the Hall’s opening night in 1891. Conversely, we poor saps in the Upper Balcony are martyrs. We are starving artists, academics, lay intellectuals, music students, devotees who carry scores around like evangelicals do the Bible and Senator Robert Byrd did the Constitution of the United States. Our lack of finery is proof of our disdain for material things. Thus, the top of the auditorium represents the top of the hierarchy—closer to God, one presumes—in music appreciation.

A second justifying myth is that the sound is better up here, like the air in the mountains is for consumptives. This is really a corollary to the first myth, since the purist comes to appreciate the music, not the spectacle of performance—a distinction arbiters of taste have sought to make absolute since at least the 19th century. Our distance from the performer thus equates to an ideal distance from the artwork itself.

I can’t testify to the sound being better or worse in the rarefied atmosphere of the Upper Balcony, since I’ve almost never had occasion to sit elsewhere. Once, I shelled out for stage seats when the concert was sold out and the opportunity presented itself; once, a kindly usher let me occupy an empty seat in Orchestra after intermission. A couple of times now I’ve sat in Dress Circle with my parents, who themselves forsook the Balcony a decade ago. Whether because after moving to Houston the original economic calculus for sitting in the Balcony changed, or because they’re exhausted of the martyr’s calvary up the stairs, I don’t know. My point is that I have very little data for comparison.

As for the wealthy philistine versus the humble devotee: I confess I’ve observed a goodly amount of philistine behavior in the Upper Balcony. It seems as likely that somebody has bought cheap tickets on a whim as that they’re rationing the season’s concerts. Nor are my Balcony comrades averse to wearing their Sunday best on Tuesday evening. Nor, for that matter, is the Balcony any safer from the terrorism of the cell phone. (Would that we were all as pedantic as Tibby Schlegel in Howards End: “profoundly versed in counterpoint,” he “holds the full score [of Beethoven’s Fifth Symphony] open on his knee” and “implore[s] the company generally to look out for the transitional passage on the drum” …)

In hindsight, I wonder to what extent these myths of the Upper Balcony are specific to my family, or can be attributed to my parents’ background. They might have been truer for the Teatro Colon in Buenos Aires, from which my parents carried their formative experiences in concert-going to the United States. The Buenos Aires of the 1950s seems to have been a place where class barriers were more keenly felt, the appreciation of classical music was more widespread, and the devout were content to pay a peso and stand in the back to get a chance to hear their favorite performer.

I suppose the easiest way to tell the educated from the un- would be to survey audience members about what those pesky encores were. But even that would be unfair to those of us in the back, who can never hear the titles when the performer deigns to announce them. Instead, we listen to the murmur of those in the lower tiers repeating the title to their companions, often during the encore’s opening bars. Then again, it does make for a nice conversation-opener with the stranger with whom we’ve spent the last two hours rubbing knees. If the way up is an exodus of the unwashed to the wilderness of the Balcony, at least the way down offers the possibility of community. It is necessarily a different kind of community from that which forms in the lobby. For this one blossoms in motion; it is the solidarity of fellow travelers, of pilgrims, and the strength of the bond emanates in part from recognizing something of the other’s circumstances in your own.

If there is any truth at all to the foregoing myths, then surely we in the Upper Balcony must appear as strange to the denizens of the Orchestra and Lower Tiers as fishes of the abyssal plain do to the average cod. I am one such beast, perfectly adapted to my low-pressure, low-oxygen environment. I suppose I’ve always looked more fit for hiking or bird-watching than for concertgoing. I arrive at the hall carrying my backpack with binoculars and a thermos cup of coffee, and maybe a book for the intermission. If it’s late spring or early fall, I may be in shorts—ready for the grueling hike up the stairs, yes, but also taking my parents’ disdain for the moneyed classes one step further: my attire says, Go ahead. Judge me. I dare you. (Once again, in deference to the Zeitgeist, I’ll blame my parents, who were (it must be said) lax when I was a child about how I dressed for concerts. I pitied the boys in suits, like I pitied my friends who had to go to Hobby Hall to dance with girls. I was eight years old when an usher asked me if I’d lost my pants. Where is the usher who will ask me that today?) I sit sipping coffee as I await the appearance of that rara avis, the pianist. The lights dim; the stragglers find their seats. I hastily screw the lid back on my thermos and stow it, take out the binoculars … there he is! Looking very much like a magpie! He finishes bowing before I can focus the lenses; he scoots the piano bench forward, flips back his coattails, and puts out his hands …

Remember when those redtail hawks first appeared in Central Park and built a nest next to Woody Allen’s apartment? People would sit in the park to watch them through their binoculars and telescopes and zooms. Weren’t the celebs jealous that week, to be upstaged by a bird!

Maybe binoculars are more indicative of life in the Upper Balcony than musical scores or starving artistry. I can still remember the first time I remarked mentally on the lag between watching a baseball hit a bat and hearing the crack. Had I been watching that batter through binoculars, the lag would have remained despite the illusion of proximity. So it is watching piano through binoculars from the Upper Balcony. Were my father not a pianist beside whom I have stood many a time watching the miracle of the fingers making music, I suppose this sight/sound disjuncture would seem like a product of the mechanism of the instrument itself, and not my perception of it. (It could be argued that this dislocation only reinforces the divide between the purity of the music and the spectacle of its production. And yet, where watching classical piano is concerned, the binoculars have only one real purpose: to marvel at the dexterity of the pianist’s hands. So much, again, for the Balcony’s vaunted purity!)

Maybe one day I, too, will get tired of the Upper Balcony, and begin my experiment in social mobility by buying tickets for Dress Circle. After all, my credentials have been compromised: I have a middle-class salary now. Time to stop slumming. It will be difficult at the box office; the ticket-seller will look at me funny; he might even call his manager and whisper something in his ear. But this will be nothing compared to how I’ll feel the night of the concert, when the usher rips my ticket and says, “Straight ahead, three flights up” (that’s the way I’ll hear it); when I stop before the last flight of stairs, on a floor that has never signified anything more than “Restroom”; when I confront the backward glances of those still climbing (their eyes will scream, “Traitor!”); and when I’m forced to find my seat in a hostile new wilderness, as strange to me as Gulliver’s islands, the natives huddled behind the flora, peering at me, readying their gilded spears. With my shorts and backpack and baseball cap, my thermos cup of coffee, and my binoculars, I will no doubt appear as alien to them as Mr. Brendel’s face will forever remain to me.