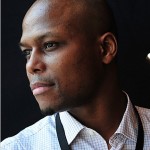 My first exposure to J.D. Allen was at last year’s Charlie Parker Festival, on the uptown Saturday, in the northeast corner of Marcus Garvey Park, where the concert had been relocated while the bandshell was under renovation. Allen’s trio was midway through their set by the time I showed up—which, at the Marcus Garvey half of the CP Festival, is defined by the threshold where the concert becomes louder than the drum circle always happening on its perimeter—and I regretted my lateness before I’d even found a spot to sit down. I love the raw power of a saxophone trio, and I couldn’t remember the last time I’d heard anything quite so raw or so powerful as Allen’s. It wasn’t just the horn, either; the whole band was relentless. They seemed hardly to come up for air.

The trio had third billing that day; still to come was the always-impressive Jason Moran, followed by McCoy Tyner solo. But nothing came close to Allen. It was the thrill of discovery, that moment when a musician or band or composition becomes “ours,” a sort of foundling godchild.

It wasn’t until the beginning of the following April that I happened to be in a record store, picked up a New York City Jazz Record, and found that the trio would be at Smalls mid-month, on a Monday night. Happily, this would be during spring break.

I got to Smalls a bit early, unsure of how much of a crowd to expect—I figured Allen was a rising star, but I didn’t know how much of a name he’d made for himself yet—and anyway, it was a Monday, and it was Smalls. As it turned out, the previous set had not yet ended; there were a few dozen people in the club, a few empty chairs toward the back. I sat down in the last row, signaled the waitress, and commenced eavesdropping on my neighbors. The woman to my left was on stopover from London; the woman to my right was from Los Angeles; she and her husband were visiting their son, who had relocated to New York to work in real estate (surprise), and who had dragged his parents to Smalls for (one presumes) an authentic NYC experience.

I ended up speaking to the madre angelina, and offered the padre, who was standing with the son behind the last row, to take my seat. Graciously declined. The waitress was tied up at the door, so I went to the bar for my drink, looking for the holy ghost in the mirrors, watching the club hop and bustle, and all the men with mysterious black cases, like country doctors. The musicians mulled about in the back. A few minutes after I’d sat down again they were announced, and filed down the alley between the chairs and the bar to scattered applause, ducking the waitress’s drink tray. Then the barmaid turned off the stereo, the dim lights got dimmer, and the trio started to play.

If I had to make a comparison to what I heard this night—and to a lesser extent, what I’d been hearing on Shine!, the trio’s latest effort, for the previous month—it would be to Coltrane’s quartet at the dawn of the ‘60s. On uptempo cuts, Allen tends toward permutations of short phrases, sometimes harking back to Giant Steps; on slower, more searching tracks, toward something like the “Psalm” on A Love Supreme. He seems more at home in the latter, in extended gestures played against abstract, washed-out backgrounds, cut with occasional squirted-out birdcalls. Granted, at the Smalls set the rhythm section had a tendency to set tempos Allen couldn’t quite match, sending him running after the proverbial streetcar. But Shine! avoids those audacious tempos … and yet one still notices that neither speed nor sharp rhythmic phrasing are among his gifts. Where Allen excels is in the sound he gets out of his horn, and in his ability to shape his rather open-ended lines into luminous, deeply-felt musical statements. In his liner notes to Shine!, Ben Waltzer describes that sound as “incantatory” and “hypnotic.” It is sometimes reedy, sometimes sodden in vibrato, always weighty—the paradox of a heavy thing floating in air. I honestly can’t think of another player to whom I’d rather listen sit on one note for a good ten seconds. But if this is so, it isn’t only because of his tone, but the note as well, the choice of where to drop anchor. And the power of those endnotes has to derive in part from the shape and momentum of the melodic line that delivers them.

In terms of his sound, and to a certain degree his approach, Allen is actually closer to fellow Detroiter Kenny Garrett than to Coltrane, this though Garrett is an alto player, Allen a tenor. (One could also draw a line from Coltrane to Garrett, who recorded an entire album of Coltrane’s music, called Pursuance; but then one could draw such a line to almost any post-‘60s horn player.) I’m thinking above all of Garrett’s Songbook, “Sounds of the Flying Pygmies” and the anthemic “Sing a Song of Songs” in particular, from which Allen seems to have gleaned a trove of useful ideas. In this respect, I found it interesting that Waltzer mentions a litany of Detroit players with whom Allen has worked, including Geri Allen and James Carter, but does not mention Garrett. Maybe they put something in the water out there, a sort of jazz fluoride. Call it purity of essence.

The affinity to the early ‘60s Coltrane, though, has as much to do with the function and interaction of the trio as with Allen himself. Waltzer notes that Detroit was ahead of the rest of the country in seeing no real difference between the (once-?)warring camps of mainstream and “free” jazz. Indeed, several times during the Smalls set, the music achieved and sustained a level of centrifugal beauty one is more apt to hear at venues like The Stone or Roulette. Not so much sheets of sound as walls of noise: deafening storms in the rhythm section—torrential rolls and crashes from Rudy Royston at the drum kit; bassist Gregg August strumming away at those fat strings—giving way to almost surreal moments of clarity from the horn. Rather than participating in the fray, Allen attempted to rise above it. The impression is of a powerful but human voice asserting itself against the din (of modernity, of mass culture … of what you like). Except that then you hear Allen’s voice calling out to his bandmates between breaths, and you come to realize that he, that human voice, is also orchestrating the chaos, driving it forward and holding it together, a ship’s captain calling forth and reveling in the storm.

I wondered whether the few people who scurried out mid-set were disappointed, daunted, or deafened, and whether audiences in the early ‘60s had done the same during Coltrane’s sets … particularly with that imp named Dolphy standing at Trane’s shoulder, prodding his squeaky pitchfork into Trane’s ever-bendable ear, trying to convince him that HE was the voice of God! And all this was particularly curious in a reputable little jazz venue like Smalls, where Wynton Marsalis might wander in at any moment, like the Hall Monitor demanding your pass. I felt sort of bad for having told the real estate salesman’s mom that Allen was “a revelation,” as I did in passing before the set began. But they were real stalwarts, stuck it out to the end. Hell, maybe they even liked it.

Compared to the prolixity of most newer jazz, one notices that the tracks on Shine! are brief, not a one over five minutes. But this belies the way the trio works live: rather than stopping and starting to name tunes and highlight band members’ contributions, each song blends into the next. (Shine! does this, at least with a few pairs or sets of songs.) They are similar enough in tone and style to give the impression of a single, hour-long composition—an approach that once again evokes the avant-garde. “Sonhouse”; “Teo (Ted’s Theme)”; “Se’Lah”: these are tunes with a sort of found-object beauty, like arrowheads. No wonder that the likes of Thoreau had an uncanny knack for finding them; they are just such barely-hewn stones, blurring the line between composition and improvisation, arising like forms of crystalline loveliness in tidal pools … only to be drowned again in the torrents of noise. The music only really stops when the trio is done—when they’ve run out of breath, I guess, or have crossed whatever collective mental or emotional finish line they have drawn for themselves.

I could go on with Coltrane-quartet affinities, Royston’s in particular: his demolitionist’s approach to the drum kit; those breakout rhythms, dead ringers for Jones’s. The flying sweat. But the chief affinity is broader than that, and as glaringly obvious. For the ultimate goal of this band, as it was for Coltrane’s, is grace, spirit, ascension. It is gospel enfolded into a jazz idiom. It hardly makes them derivative. On the contrary: a collective working toward spirit seems always renewable.

And yet … where would such spiritual exercises be without just the slightest hint of the charlatan? I couldn’t listen to Coltrane without distrusting him a little. Allen, too: the throwback fedora and number-runner’s suit. Just like I distrust the Bible-thumping preacher as he steps up to the pulpit, in that moment right before I take the first sip of my whiskey sour, close my eyes, and get swept up in the sermon.

Can I get a hallelujah?