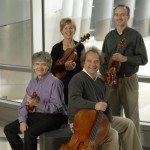 The Takacs Quartet in 2012, photographed by Peter Smith

Quartets seem to be in the cultural crosshairs of late, at least judging from two recent middlebrow movie releases, The Last Quartet and Quartet (both 2012). If the latter, a geriatric Brit comedy set in a home for retired musicians, isn’t about a string quartet per se, it’s perhaps that much more an indication that quartet-ness has come to be regarded as a figure for community, a ready-made dramatic framework for exploring the dialectic between individual and group, the converse perils and joys of intimacy and isolation, and the struggles and strains behind finding a coherent, collective voice.

Watching the Takács Quartet in action during their master class at Weill Recital Hall last week was an engrossing reminder of these dramas of collaboration. The subjects were two of Beethoven’s late quartets, the Opus 131 and 132; the participants, three young quartets, the Spruce, Linden, and Attacca. It also made for an interesting contrast with my own previous experiences of master classes, all of which had been piano. When the pianist’s clear, single voice of authority is split in four, the dynamic changes, revealing to what extent a quartet’s unified voice is the product of consent, compromise, negotiation, and argument. The tightly-braided rope that is the quartet in its final, public form unravels into its individual strands, exposing an amiable babel of semi-private voices.

It was in this spirit that Takács violist Geraldine Walther called out, “Don’t worry, Ji Hee, he’s been telling me that for years!” just as the younger violist (of the Spruce Quartet) was about to make a third attempt to appease Takács violinist Edward Dusinberre. Dusinberre was on stage, circling the Spruce, score open in one hand, asking them to pick up the Allegro at different measures, stopping them to comment, ordering them to repeat. Walther sat in the audience; her voice could have been any of ours. Her comment actually provoked a good deal of laughter, as she would several times over the course of the evening, a testimony to the easy atmosphere the class maintained despite the intensity of the undertaking and the grave beauty of the music, as the veterans prodded their younger counterparts to approach certain passages differently and experiment with new sound combinations.

As the exchange between Dusinberre and Walther suggests, the personalities of the Takács players fit neatly into their roles in the quartet, at least as they appear in performance. Dusinberre played first fiddle for much of the evening. The most outspoken and demanding, he also seemed to have the clearest sense of what he wanted, of the dramatic trajectory of the piece as a whole, and the language with which to express it. Cellist András Fejér was the second on stage, though he spent most of his time leaning against its left or right flanks, like Dusinberre’s goon. When he had something to say, he would approach all full of righteous fire, make his point, and then slink away, setting the tempo by snapping his fingers. Violinist Károly Schranz was less present, though he did lead part of the discussion of the first movement of the Opus 132, while Walther sat either in the audience or at the base of one of the columns along the rear of the stage, interjecting something to lighten the mood if the musicians seemed flustered, or taking their side if Dusinberre pushed a little too hard. (As Dusinberre was trying to get more lilt out of a phrase made up of rapid tradeoffs between cello and viola, she said, brightly, “It’s my fault, I told him [Linden violist Eric Wong] to play it that way.”) The prowling dominance of the first violin; the thoughtful if less prominent contributions of the second; the stabilizing role played by the viola; and the pantoum of the cello, who spent much of his time on the margins, but who would thrust himself into the foreground when he had something to say, and then retreat, holding down the tempo. Dialogues have just such a rhythm: characters who speak more, characters who speak less, and characters who hardly speak at all, but whose presence and occasional contributions are all the more necessary for pacing and rhythm, and without whom the drama, which only the others seem to be moving forward, would collapse of its own weight.

From the standpoint of music writing, the most fascinating thing about a master class is the opportunity to watch and listen as music is transformed into something else. It’s a setting where all the nuances of oral and gestural communication are called into play. The swinging conductor’s arm, demonstrating not just tempo, but rhythm, mood and line, often accompanying the singing of melodies. The proximity or distance of the teacher’s body, sometimes leaning in over the players, sometimes touching them—and sometimes far away, the disembodied voice in the room that eventually worms its way into the musicians’ heads, and then into their muscles and sinew. As for the words themselves, they can be brilliantly concrete (as when Fejér asked for a particular passage to display greater yearning, and then affectionate yearning, when he realized that an aspect of the personal was missing), or tumble and bleed into gesture and song; they are tugged this way and that, collected like pebbles to create greater emotional nuance, marshalled together into narrative arcs (sickness and convalescence, despair and hope), or appear as murky tickers along the measures in the score.

At one point, Dusinberre asked violinist Sarah McElravy of the Linden Quartet how she interpreted a particular phrase. When she replied, he answered, “I agree with you; but that’s not what I’m hearing.” He asked her to match her playing to the concept he had just pushed her to wrestle into language. And she did. Even Dusinberre commented on this: the incredible facility these players had for transforming opaque, knotty instructions cobbled together from a clumsy mass of words, gestures, half-sung melodies and snapped fingers into concrete musical expression. It may have been partly the effect of hearing the phrases again, set off from the rest of the movement, and thus framed anew, or even just hearing them more than once; but there was no question about the differences, sometimes subtle, sometimes dramatic, these changes created for the listener. It is something magical for the non-musician; one comes to appreciate the remarkable plasticity of the musical text that much more.

Another example was the debate about how to approach the different parts of the theme (the droning introduction and the chorale) of the Opus 132 Molto adagio: with or without vibrato? The Attacca Quartet was asked to try both, if only to hear the difference. The first thing one notices is that the lack of vibrato is part of what gives those big, perfect intervals and slowly-accreting harmonies of the introduction their sacred quality; too much voice, too much of the human, ruins the effect—the equivalent of inserting a figure into a Rothko painting. With the parallel introduction of the Opus 132, the Assai sostenuto, the Linden was asked to resist the temptation to play it crescendo. The addition of each instrument successively in the opening phrase did not necessarily mean the volume should increase. And then, for the third essay, another correction: that the sound was not growing did not mean the music should be played tentatively. So we listened to that introduction transform over three or four readings, into something yet more beautiful and more moving; the absence of crescendo had, somehow, an emotional payoff. The same thing happened with the droning of the Adagio: a side of the spirit of the piece hitherto hidden suddenly manifested itself, perhaps not only because we heard a difference, but because we were being taught how to listen.

I’ve noted elsewhere that younger quartets can play the romantic repertoire with an almost histrionic intensity, which can be sometimes exciting, sometimes alienating. The Linden Quartet brought just such an intensity to the Allegro of the Opus 132, stretching it almost to the point of snapping. Here Dusinberre provided a welcome counterweight, reminding the players that there is a limit to dynamic range: if you play all your fortes as fortissimos, there will simply be noplace else to go. (As a writer friend of mine likes to say, “The lights can’t always be on.”)

But Dusinberre and the Takács as a whole played an even more important role in this regard. “You need to lean into each other more,” he said at one point to the violin and cello; and they did, actually physically leaned into each other—producing, once again, audible results. It was a reminder that music making is deeply and essentially bodily, that there is no music without movement. This was clear enough from the nearness of the music-making bodies in the room—sweating, stamping, swaying bodies whose movement, sometimes slow, sometimes vigorous, was responsible for everything we heard. It’s the intimacy of the chamber in chamber music that Weill comes closest to reproducing: the chamber that is the body, its walls erected around that pious organ, itself a mass of chambers, a throne of meat busy flushing blood around the body’s plumbing; and the chamber-pot, the chamber as the place of voiding and excreting. Music has its share of this, is about this, much as we try to spiritualize it, sequester it in big, impersonal cultural temples with ceilings that mimic the heavens.

Of course, nobody knew this better than Beethoven, and nowhere is that struggle with physicality more fully expressed than in the Opus 132. It was, after all, his digestion that struck him down, as it had plagued him his whole life. He wrote the quartet as he recovered from a long illness he had presumed to be mortal, as a “sacred song of thanksgiving from the convalescent to the divinity”—a letter, so to speak, from the body to the spirit. But what does the young musician, the young man or woman, know about these things? This wasn’t just about playing or not playing your fortes as fortissimos. During the jauntier Andante interludes of that haunting slow movement, Dusinberre noted that the musicians were responding too forcefully to the “Neue kraft” instruction in the score. This was hardly the energy of an old man just recovering from a long illness; one could not play these passages with the almost harsh physicality due, say, a symphony or sonata of the composer’s heroic period. This was a late quartet, in the fullest sense of that word. Not to say that a younger artist can’t empathize with and imaginatively understand the aged, ill Beethoven, but rather that a younger artist would be unlikely to come to the piece with this knowledge, and even less with the emotional maturity necessary to embody it.

The last time I heard the Opus 132 played live was last fall at Fashion High School by the Pacifica Quartet. The whole concert was one of the finest quartet performances in recent memory, even, or perhaps especially, in its incompleteness. In the middle of the Molto adagio, the stage lights—true story—went off; a few minutes later the musicians, unable to see their scores, were forced to abandon the performance. (So much for Neue kraft.) Now, it’s hard to think of a piece of music where a sudden plunge into darkness is more appropriate … though a slow fade might have been preferable. I remember thinking, If only we could find a way for them to finish. I’m sure everybody else had the same wish, and the Pacifica, too. And Beethoven? He had such plans: a tenth symphony, another great choral work. That great mournful darkness of the spirit, the animating force of the music: maybe this, above all, was what the Takács Quartet was there to teach.