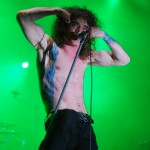 How did little Blitz grow so tall?

I’d been busy watching the slow striptease of that black satin shirt, a button here, a button there—normally he’d be as topless as a go go girl by the set’s end, this small, gamey man with the boxer’s nose smashed onto his face and the glowering blue eyes. Tonight, though, he only has forty-five minutes. Forty-five minutes! “We’re runnin’ out of motherfuckin’ time here,” he cries, in a voice that distills twenty-five years of Turnpike grit and Jersey mockery, the voice of an old boardwalk barker or casino whore: wheezy, grating, peppered with expletives, and pierced now and again by hoarse, squealing laughter. He’s trying to get himself off, you see, and he hasn’t yet, and he’s runnin’ out of motherfuckin’ time. When he stands hunched in front of the mic, his head stutters more than bangs, somebody pull the clutch out, Bobby’s stuck. And those big entrances: sprinting for the edge of the stage, catching the mic stand along the way, tilting it over one knee; he has to time them just right to pick up the first words of the verse post-bridge. But with all the head-stuttering and sprinting, with “Rotten to the Core” and “Electric Rattlesnake” and “Wrecking Crew,” with the shirt that comes off in dribs and drabs, he’s still not convinced. And so neither are we. And though we try to give him the energy with our own violent movement and adoring expletives, we know Blitz isn’t there.

And then, during “Elimination,” it happens: Suddenly he is atop the monitors, balancing on one foot, splayed, enormous, chest heaving, driven there by the fury of the music, by the jackhammer in his voice, by the cut-tin edges of his breath driving through that scream, eliminate eliminate eliminate ELIMINATE!—newly tall, this electric man with the boxer’s nose and eyes that dare you to be tall, too. Now the whole band is ready for “Fuck you,” they needed “Elimination” to get them to the brashness of “Fuck you.” And here again, as the song nears its end, Blitz climbs atop the monitors—but slowly this time, squeezes his legs together, holds out his arms, middle fingers raised. A self-crucifixion in blasphemy, or at least vulgarity; the stiffly-raised fingers are the nails from which he hangs. Fully unbuttoned, the shirt clings to either shoulder; the belted pants ride low on his hips, exposing the join of thigh and belly, just shy of decent; his body is a braid of muscle, and entirely hairless, jerked, it seems, by sun, tar and rage. A mirror-Christ. In that moment I am sure he will ascend, hover a few feet over the drum riser in a halo of noise and power, the thin raiment of his shirt still clinging to him, and then disappear up through the lights, his body but the husk and the echo of that voice, its flesh totem.

Somewhere between the becalmed pose of inverted worship and the fragging on the grenade of his own rage—somewhere in that cross of sky-daring rebellion and sneering martyrdom, the soul of metal.