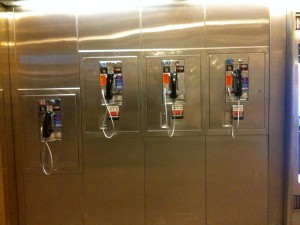 Look at these beauts. Their fine metal livery polished, a bevy of butlers awaiting your handful of change to connect you with anywhere in the world for four solid minutes.

The nuclear family: junior on the far left, his mostly-grown sister beside him. Mother has to wear heels just to look her in the eye.

The urinals in the men’s room: all but one at standard hip height, the last at the level of your knees. (Ah, Democracy! Who says that Capital has throttled thee?)

Here is the most remarkable thing: they work. Not just hung on the wall to be admired. No sir.

Why? Why? Why the working phones, the gleaming metal?

Because you are in Grand Central Station, and Grand Central is supposed to evoke the New York of another time. Saved by landmark status, Grand Central is at once impressively functional and a museum of itself. Although the design dates from the early part of last century, to most visitors the station probably evokes a slightly later New York: the fast-talking, highball-downing, fedora-and-trenchcoat-wearing ‘40s. The classic photo, where light streams in through cathedral-tall windows, and the little people with long shadows make their halting, hunched way toward the gates. The eternal soundtrack of the City, bebop.

Like the rest of the station, the payphones serve the two masters on whose marriage Grand Central prides itself: function and ornament. But the payphones are unique in that their functionality fulfills their status as ornaments. If they were not required as ornaments—part of the Grand Central museum, the myth-projection of another New York—they would be allowed to perish, as everywhere else in the City. For what would Grand Central, the culmination and glory and celebration of the golden age of rail travel, be, without payphones?

Commuter rail may be alive and well, but trains—like payphones—are objects of nostalgia. Behemoths are always pitiable in their defeat: Kong swaying from the cupola of the Empire State Building, Godzilla’s denuded skeleton sinking in the ocean.

Go ahead and leave that nickel for the homeless man shuffling by, sticking his well-practiced finger in each coin-return slot. Like the bit of crop the Bible says you’re supposed to leave the beggar. Or the traveler.

As long as Grand Central is here—that is, as long as there is any value in trussing up the past and decorating it with a FOR SALE sign—I know I can depend on these phones. And they will always be polished, because they are the mirrors into which we look in order to see the New York of our dreams.