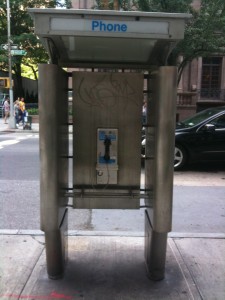 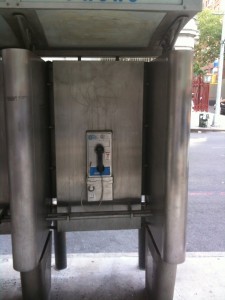 Here are a couple of payphones on Madison Avenue, somewhere in the upper thirties. Note the residue of the scrubbed-off graffiti tags on their scuffed foreheads, and the paint streaks, maybe from when the phones were originally tagged.

There is a twofold irony in this desperate and unfulfillable desire to erase the graffiti. One: these phones almost certainly don’t work. They probably didn’t work when they were tagged. So why the effort? Better to persuade me that graffiti equals blight, and tear them out.

But if you tore them out … where would you put the ads? 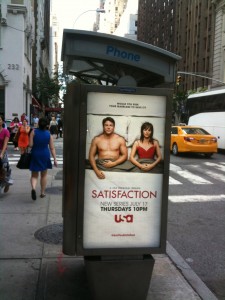 This is Madison Avenue! Irony number two: surfaces must be scoured (though never cleaned) only to provide a substrate for an exponentially more audacious act of vandalism.

The payphone is one of a number of post-useful objects resurrected to a life-in-death of bearing a corporate message. But then we’ve all found a measure of purpose (read: utility) in carrying such messages, haven’t we? Hiveless bees pollenating our beloved corporate flowers, we are reborn in/as ads. They guarantee a continued, albeit attenuated, existence.

Two eras, two myth-images of the City, are superimposed in these two views of the payphone: the graffiti-festooned City of the ‘70s, and the ad-festooned City of today. Peel the ads away, examine them with X-rays, and you’ll find traces of graffiti underneath, the ad-urge just the graffiti-urge appropriated, corporatized and capitalized.

Dare I dream a third image? A next phase in the City, where the ads are not ripped down or scoured off, but grown over? Don‘t subtract; add! Why not, when New York has always been a glorious palimpsest? And if phones have nothing but aesthetic value now, perhaps we should turn to them for our next big beautification project. Paint them outlandish colors, bedeck them with flowers and climbing vines, make them the shrines they already aspire to be. Imagine a bower and a mural on every corner! What a city this would be!