It is the late ‘90s, and I am at Don Hill’s, watching a band I wouldn’t normally go out to hear, except that two of the members are friends of my girlfriend. A mixed-gender power trio, good musicians, good people. Just not my scene. Anyway, at what may or may not be a pivotal moment in their set, the lead singer/guitarist starts screaming. And then the bass player, who also has a mic, starts screaming. And then some members of the crowd start screaming along with them. Listening to all this screaming, I think: “This isn’t really screaming. It’s screaming about screaming. They’re listening to themselves scream and getting off on it.”

Now, this sort of thing creates some pretty complex negotiations between band and audience. For example: when the crowd at such a show screams for more, are they really screaming for more? Or are they screaming about screaming for more? If the crowd unselfconsciously screams for a band that only screams about screaming, are they having the wool pulled over their eyes? One or the other might mistake a scream for a scream about a scream, or vice-versa. Clearly at Don Hill’s people weren’t enjoying the spectacle of a band screaming, but rather the spectacle of a band enjoying listening to themselves screaming. In fact, they were probably enjoying listening to themselves screaming at a band who were enjoying listening to themselves screaming, and were hence thrice removed from the experience, whatever that was. But isn’t this partly the fault of going to shows in the first place, of putting oneself in the position of art consumer, at best quasi-participant? If we really wanted to scream, we’d stay home with the kids or dog, get out the vodka and the drums, crank up the amps. I blame: live music, something else, society, capitalism, in ascending order of responsibility.

Metal has reached an interesting point in its evolution. Like any living genre, it is in flux, nourishing itself on a variety of musics: ambient, noise, punk, prog, etc. And yet that label, that omnivorous signifier, perhaps because of an imagined historical or cultural coherence, is consistently invoked to patch over a trainwreck of influences and styles, and to create an aura of musical coherence and continuity. Bands and fans position themselves at varying distances from an impregnable, ideal generic center, always close enough to point to, but never close enough to touch.*

Among other things, this means that lots of different kinds of people end up stopping by the same clubs to hear the same bands, or different bands on the same bill. This is at least as old as the subgeneric explosion of the ‘90s. But I think that something about the attitude has changed. I have a vivid recollection of a Halford show at B.B. King’s in 2003, for example: a sea-change in the crowd between Immortal and Testament, the two supporting bands; one wave receded to the bar (at least those old enough to drink) or out of the club as the other washed up to the stage. Whether they joined at the wellspring that is Halford I can’t remember. Today, I think it is less common—much more difficult, for a genre propelled forward by a combination of absorption, mutation, revival, and kitsch—to define one’s allegiance or heritage quite so narrowly. This heterogeneity, this instability, means that you can never quite tell how band and crowd are hearing each other. The same listener might position him or herself differently with different bands, and a single bill might require him or her to cross over two or three times in a night, toggling between facets of a bric-a-brac musical identity. That I find this sort of thing exhausting hardly matters; for a generation raised on internet multitasking and a dehistoricized mishmash of music, it is the order of things.

What got me thinking about these fan-band negotiations was last week’s Whores/American Sharks show, at the ecumenically metal St. Vitus.** 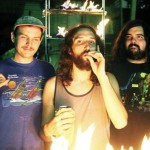 The Sharks are a party band from Austin. They take a page out of Municipal Waste’s book—that I-was-a-shop-burnout/high-school-fuckup persona—although they’re too much a muddle of styles to worry themselves about reviving anything in particular. Actually, their music sounds like The Ramones wearing a metal skirt. Singer/bassist Mike Hardin, a big goofy teddy-bear of a guy, spins cock-and-bull yarns between songs about being the too-old loser living in his mom’s basement, meant to inspire moments of ironic reverie. Guitarist Will Ellis looks like a cross between the father from the original Hills Have Eyes family and Rudolf Schenker: blond, mustachioed, wearing short-shorts, and headbanging to the Scorpions records spinning away in that basement room in his head. He plays an upsidedown Gibson Explorer (at least the neck is), Hardin an upsidedown Fender Jazz—which, I guess, is a comment on how I’m supposed to take the Sharks: not seriously.

But then that’s the problem: they are so self-consciously trying to be not serious, are so intense about their irony, that it all ends up feeling a bit tired. Self-deprecating humor can become as masturbatory as an Yngwie Malmsteen solo. You get the sense the Sharks outgrew themselves before they even got started. (I’ve never felt this about the Waste, although I admit that with The Fatal Feast they’ve started to show signs of wear.) 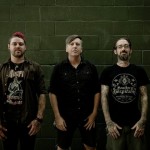 After American Sharks, how can any band, let alone one called Whores, appear as anything but Serious Music? They certainly looked more serious; singer/guitarist Christian Lembach (middle) is damn near clean-cut, in a punkish sort of way. Who knows but that they brought the Sharks along for sheer contrast, although more likely the two got really drunk together after their 2014 SXSW performances. It was certainly a Serious Comment Mr Lembach made partway through their set—unlike the Sharks’ truncated rambles, his were rather softspoken, and I missed a good half of what he said; but I did gather that they were happy to have good-time folks like the Sharks along with them on tour, that they were pleased to be back at Vitus, and that they didn’t sing about dragons and wizards—not that he had a problem with that—to each his own, it takes a rainbow, etc.—just not his scene. I wondered who this comment was directed at, if there was an errant Amon Amarth fan in the crowd looking at a subway map. Anyway, said Serious Comment disposed me to change my attitude, and Listen Seriously.

Not that Whores are devoid of humor; they did start and abort “Sweet Home Alabama” (they’re actually from Atlanta). But I appreciated the lack of desire to impress me with being funny, and that they instead poured all the sweat and energy into their music for a brief, pleasurably intense set. Whether they meant it or not, they sure played it like they meant it, which is a whole lot better than playing it like they really meant they didn’t mean it. Even the serious Mr Lembach ended up with his bangs stuck wetly to his forehead and his face all ruddy. His tonsorial trials, however, were nothing compared to bassist Jake Schultz’s, who had to push his hair up over his forehead after every song—I swear, I haven’t seen anyone push up their hair so much since the last time I went to hear Frances Fox Piven give a talk. But Mr Schultz, even more than Mr Lembach, was in constant motion. A study in ecstacy, he was; he does with his bass what Keith Moon used to do with his drums. He must have been doing this very thing for years alone in his room, the very room the Sharks are still ironically locked in. Somebody just pulled down the walls. In my mind, he joins that trinity of joyful lunatics and human tops: Gould, Monk, and Moon.

As for Whores’ songs, they’re infectious, grabby despite that dynamics-happy, basement-pitched monotony the subgenre demands.§ It was their sound, though, that most held me. Like the Sharks, Whores are a power trio, but theirs was by far the bigger sound. Not the sound I expected to hear out of Lembach’s Telecaster; maybe it was the Tele’s twanginess (or the prevalence of Schultz’s bass?) that gave those power drones their unexpected, all-enveloping richness. It’s like what happens when you’re hiking, and you’ve reached what you think is the view (Sharks), but when you get to the actual view (Whores), you realize how partial was the previous one.

I could say more about Whores—they never judge you, after all—but I’ll end with this: they made me miss my train. One song, one dip in that warm ocean of distortion, and I knew I wasn’t leaving until the set was over. And that’s saying a lot, when Greenpoint might as well be Key West to an upstater, and surprise, the G wasn’t fucking running, which made me ironically nostalgic for living in Bushwick. We got out just as the lofts were washing around our ankles, a Williamsburg hurricane reportedly heading toward our coast. But the important thing was to be able to tell my partner, Whores made me miss my train. I was late because of Whores. Tee, hee. Oh. But seriously.

* For a somewhat fuller (or maybe just different) discussion of this phenomenon, see “T-Shirts and Wittgenstein” (5.24.13).

** I ignore opener No Way because I only caught the last song and a half, which isn’t much to go on. Their sound made me think of the ‘90s band Filter (remember them? their big song was “Hey Man, Nice Shot”). I liked their frontman’s presence, that shirtless bodybuilder pose he struck while he serenaded somebody just a few feet over our heads. His voice made me think of a spoken-word John Bush (Armored Saint, Anthrax).

§ That is, noise rock, or sludge punk. As I have suggested, this is more than ever a matter of perspective—Spin, for example, listed 2013’s Clean among its top 20 metal albums of 2013. As Mr Lembach’s comment suggests, he might be a bit wary of the label. Of course, Metallica said the exact the same thing about their own music back in the mid-‘80s. Plus ça change? Or does the historical repetition (one Lembach has himself repeated in interviews) mean I am supposed to take this, too, as farce?