I live near the Appalachian Trail, and on days I don’t work, I walk the dog there, follow the white blazes a mile or two toward either Ktaadn or Georgia and back again (or, starting north, make a triangle with roads for legs and the trail as a crooked hypotenuse). During the summer I run into a fair number of people, some with dogs, some without, some doing a weekend or a week around the so-called tri-state area, some walking the whole damn AT. Most of the latter start in Georgia and hike north, trying to make Maine by the end of summer, staying ahead of the hot weather. Less common, though increasingly popular, is to start in Maine and hike south, shooting for Georgia by October, cold nipping at your heels.

They are different sorts of people, the northbounders and southbounders. The former tend to be more sociable; they’ll walk and talk with me if I happen to be going their direction, or stop to chat and pet the dog if our paths cross. The southbounders are more taciturn. If they chose this direction, it’s often because they prefer solitude. There is an urgency about them the northbounders don’t have, and it’s not, or not merely, for the end of the trail.

When I run into a hiker on the AT, whether Ishmaels or Ahabs, I ask them if they’re going the whole way. A surprising number are. Sometimes I can tell, particularly with the men—the beards, of course, swallowing their faces. Sometimes they ask me where the nearest shelter is, or how far it is to a particular town, and I get to play the seasoned local, though I’ve only been in the area a couple of years, and only started hiking on the AT regularly last summer. Parting, I wish them luck.

One day as I was coming back down the nearest mountain from a southbound walk with the dog, I spotted a hiker wearing a black T-shirt with red, intertwining letters. I could guess the genre, metal, from fifty yards away, and became more confident once I was within reading distance by the fact that I still couldn’t make out the name of the band.* I stepped aside to let him pass. It was actually this young man who informed me that he, not I, was supposed to perform said obsequities. But then he was no Ahab, black T and southboundness notwithstanding. He was only out for a week, hiking part of Connecticut and New York, before returning to some suburban harbor.

Peering at the tangle of silkscreened letters, I had to ask him the name twice. First he just said it was a band. Why would he answer otherwise? I was wearing a treehugger shirt, walking with my dog; I looked for all the world like a treehugger. But then it’s hard to find white metal shirts, and with the ticks as bad as they are around where I live, I don’t tend to venture into the woods in black. I know, a true fan would risk Lyme, &c., &c. Still, once I expressed interest he was more forthcoming, even enthusiastic. He even rattled off a number of subgenres to help me position their sound. I told him I would look them up, and we parted ways.

When I got home I couldn’t quite remember the name. I just remembered it was short, and started with “A.” A name like a riddle, a secret in a thicket of letters, passed between strangers in the woods. It could have been anyone, anyone’s word; now it was mine. A word that would open a portal to fantastic new worlds and powers, like Abracadabra, or Aminadab. How else to explain my scrolling through the first 880 of 8,950 bands with names beginning with the letter “A” in the Encyclopedia Metallum just to find them? Good thing I remembered they were from Texas. 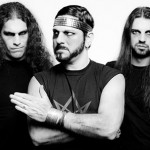 An odd fish, this band. They’ve been around, like, forever, though not quite as long as the Sumerian and other mythologies around which they’ve built their lyrical concepts. They’ve also gone through about a hundred different incarnations. There is a priceless interview on YouTube where drummer, sometime vocalist, and lyricist Proscriptor McGovern (center)—very much the driving force of this outfit, as his name makes abundantly clear, and the one consistent presence through more than twenty years of lineup changes, injuries, and cross-generic side projects—holds forth on mythology and mind-expanding drugs. McGovern is a tad haughty; his interviewer is intermittently bored; neither can help but be. He calls their music “mythological-occult metal,” the title of a 2001 compilation, citing black, death, thrash, classic metal, and “progressive music” as influences—which is just another way of saying the band is a sonic amalgam all their own. This is borne out in the uploaded tracks, albums and live performances: vocals that veer between King Diamond sneers and yowls and black metal hisses; long, multi-part songs alternating Slayer-style speed (and more rarely, death/grindcore tempos) with rhythmic patterns more reminiscent of NWOBHM and Immortal’s pummeling two-on-threes, and interspersed with snippets of soprano voice, acoustic guitar, bagpipes, and so on. As befits such a melting-pot sound, comments after the videos debate appropriate subgeneric affinity—metalheads can spend as much time parsing subgenres as theologians can sins—including one claim that Absu is proof American black metal is present, vibrant, and rivals anything coming out of Europe.

Why do I write this? Certainly not to throw my hat into the ring vis-à-vis defining Absu’s sound; I am nowhere near learned enough. Rather, I find the whole experience to be a fascinating example of the mixed modes through which musical exchange happens today. That it should be a band so self-consciously esoteric, so aimed at whatever remains of a metal underground, as Absu, makes the example all the more compelling.

The assumption seems to be that Facebook, YouTube, Spotify, etc. have replaced earlier forms of music-sharing and band/scene-growing. True, it’s a hell of a lot easier to toggle, download and stream than it was to trade cassettes by mail, as the more motivated and earnest among us used to do. There is certainly something to sociologist Keith Kahn-Harris’s point that the internet has softened the edges of scenes and helped to blur once-firm boundaries. Transgressive subcultural capital, it might be said, has been increasingly devalued (see “T-shirts and Wittgenstein,” 2.24.13).

Without the internet—in my case, the Encyclopedia Metallum and YouTube—I’d probably never have heard the name Absu again, let alone their music. And yet: without the other elements—the merchandise (T-shirt, of course) on the one hand, and the absolute and utter contingency of actual, physical contact on a hiking trail on the other—I’d never have heard this band, either. The fact that almost everything is available on line doesn’t mean that one has the opportunity to hear it; pace Borges’s Library of Babel, only a tiny fraction of what’s out there can ever be heard by any one person. Put differently: I am almost as unlikely to have discovered Absu on the web as on the Appalachian Trail.** What with all the discussion about the way the web has transformed music sharing, the concrete, tangible elements, and the way these work in tandem with the web, tend to go unremarked. It is still about shows and venues, from the more genre-exclusive clubs to individual concerts at bigger halls. It’s still about asking the baristas at the hipper cafés—the ones where the youngsters hang out, whose ears have not yet been ossified by Prevailing Standards of Taste—what on earth is that odd thing coming out of the speakers. It’s still about poking a finger at the T-shirt for some band you can’t read and likely never heard of and asking what the hell that says. And it’s still about some guy I will almost certainly never see again, walking through the woods, throwing little bits of music over his shoulder like Johnny fuckin’ Appleseed.

* This is something the other guitarist from my old thrash band used to bitch about. How can you expect people to remember your band if your logo is unreadable? But then we were from the ‘80s, where the logos all looked like they’d been done in somebody’s mechanical drawing class. Maybe the increasing rococo-ness of band logos after circa 1989 was indicative of generic metastasis and, in some cases, the impenetrability of emergent subgenres to a classically-schooled old guard. (In hindsight, I should note that Absu’s logo is hardly of the impenetrable kind. It might have just been a bad silkscreen.)

** Admittedly, it’s not about sheer numbers (though don’t forget the 880 bands before A-B-S-U). My likelihood of hearing a particular band clearly increases according to the sites I tend to visit and the on-line communities I frequent. It might also be noted that my likelihood of running into a metalhead in the woods increases exponentially when the metal in question is of the neo-Druidic variety, as Absu’s is. Where else to meet a black metal fan than in the dark church of the northern woods? Anyway, there is still much work to be done on the extent to which the web creates new networks versus capitalizing on and reinforcing existing ones, and the ways in which the two work together. (Also: For an interesting discussion of the way the library itself has transformed due to the web and the promise and peril of digitization—and the role the codex is expected to continue to play, at least for the foreseeable future—see Robert Darnton, The Case for Books (Public Affairs, 2009), particularly “The Future of Libraries” and “A Paean to Paper.”)