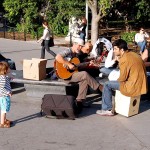 I love spring in Washington Square, when the musicians come out with the crocuses and daffodils. You’ll be walking through the Square on one of the first warm days of the year and hear the strains of a trumpet or a saxophone you hadn’t heard since the previous fall, and you’ll recognize it immediately, though the notes, and by and large the musicians, are as anonymous as cathedrals.

The other day I took a train to Park Slope hungover and got my taxes done and had lunch and sat down in Ozzie’s café and finished Sweet Hearts by Melanie Rae Thon (what a writer) and then sat drooling and half-dozing watching the shops across the street re-open while the sun emerged from behind clouds and beat through the window. Then I took a train back to the City. I listened to “Perugia,” maybe the most mournful piece on Brad Meldhau’s album Places, while the B train crossed over the East River, listening to the clatter of the train over the music and watching the water and the city behind and before me for the duration of the crossing. The sun wasn’t going anywhere now, and between the satiety of the receding hangover and the slight caffeine buzz and the nostalgia of the music and the view of the city from the bridge high above, all of these things colluded to bring about one of those lingering moments when you think about old lovers and other possible lives, and you feel a secret sad joyful resignation. I felt pleasantly scummy, too, as if I’d never made it home the night before, as if I were still in my itinerant twenties, all full of wanderlust and the spirit of vagrancy.

So I wasn’t ready to go home yet. I got out at Canal and footed it up to Washington Square, on this first real spring day after half a week of torrential rain. How could the Square not look radiant? And who should be playing on this day but Lawrence Clark. Lawrence is a young tenor player I’ve spoken to a couple of times. He seems to have had a champion in the late, great Rashied Ali, whom he played with at the uptown Charlie Parker Festival in 2008. Another time I tried to go see him at The Kitano, but he didn’t show. (An image from that set sticks in my mind: a drop of spit clinging to the edge of the bell of the trumpet, falling, forming again there.) He played brilliantly at the Festival—better, I thought, than the young altoist whom the crowd obviously preferred, and who won the day’s perhaps unintended (but always implicit?) cutting contest. Her sound was more firmly grounded in R&B; Clark, following Ali, has a tendency to play farther out. The crowd that comes out for the Charlie Parker Festival is not the same crowd that goes to, say, The Stone, or Roulette—not even the crowd for the downtown sets on Sunday, so far as I can tell.

Clark’s blowing has a buttery tone reminiscent of Rollins’s. At least, that was what struck me when I sat down to listen to him play, closed my eyes in the sun like I had in Ozzie’s. Jazz sounds almost preternaturally good after a hangover. You surrender yourself to the music, you let it wash over you. And then all the pores in your body open, and the music saturates you. Of course, there’s a time and a place for intellect and processing, for standing back and comparing musical phrases, for thinking the music even as you listen. But this was not such a time or place. Not in Washington Square, at the beginning of the spring, after drinking too much. These are moments for surrender.

It was a trio, sax and bass and drums. The bass player had thick dirty fingers—Brahms had fingers like that—and a red star on his baseball cap. There was a plastic wheelbarrow set in front of them, for donations. A wheelbarrow. It seemed a bit ambitious.

It was like running into an old friend—even though these musicians wouldn’t know me from Adam—because the sound, the sound was back, very much the sound of the Square. (And this remains true, mind you, even as much of the old vibe seems to have migrated north, to Union Square.) I’ve always loved this quote from Eric Dolphy: “Once the music’s over, it’s gone, in the air, you can’t get it back.” But in the Square you can get it back; the circle is inscribed in the square, the music is as cyclical as the seasons, and as transient as the passers-by. That’s the beauty of it: you leave one day in the middle of a song, which fades slowly out of hearing as you walk away; but you’ll pick it up again the next day, or the next week, or the following year. Each band may be staked in a different corner of the park, but the listener lives on the frontiers, the melodies mesh one with another. And in the meantime the other business of the Square goes on around, a Whitmanesque time immemorial of walking-meeting-parting-listening-playing. And so you’re never sad to just be passing through, because you’re never just passing through, because you know you’ll return to this very spot, and the sound will be here, an old friend, waiting, in that one long jam without beginning or end.